I am all of a sudden having problems with turret indexing on my Oak equipped Mori SL1H. At one point tools 1-5 would not index properly and then the symptom changed and it seemed like It works good if you index no more than 1 tool at a time but when it has to rotate any distance to the next tool it tends to under shoot the index. I had hoped I might get lucky and adjust the collar that has the ears that the 5 hall effect sensors read for indexing. Now I seem to be chasing my tail and the no matter what it isn't right and I can't get it to rotate far enough to seat in the curvic coupling. No crash leading to this I'm the only operator.

I'm wondering if it there may be a key or shafting that needs repair on the motor. But what else might I be missing? Any tips for inspecting the Hall Effect sensors? They probably show up in the I/O area? If it were a hall effect sensor would the machine still always indicate tool location properly on the control panel?

I think I am going to pull the motor and check the shaft in the morning.
Top

Spent half the day out of the shop fixing Dad's furnace. I seem to have made progress adjusting the collar with the reluctor wheel that the hall effect sensors read. To answer one of my own questions above. Yes the reluctor wheel can be quite far out with only one or even no sensors triggered in the I/O and the Control panel will still display a tool #. This machine seems to read a combination of 2 sensors. I am not sure if this adjustment is a band aid or what. All the hall effect sensors seem to show up in the I/O diagnostics when you would expect them to. Including the sensor indicating the turret is clamped.

With the turret seeming to operate correctly I am now getting a 311 Waiting for memory bit #21 M101 alert on the control at every tool change. I have not noticed this before but it doe not seem to effect the ability to run a program. I some what suspect there may be another issue other than reluctor adjustment. But it does seem to have improved the situation.

I also pulled the motor and the gear on the output shaft seems to be ok, the motor spun easily but it seems the gear is firmly affixed, The gear it meshes with that powers the worm gear seems ok. With the turret actuated out (not clamped/locked) there is some play between the gear and motor. During my inspection this showed up in the worm. Although I cant say if it is any more excessive than when I aligned the curvic coupling the spring before last. Maybe though?

I thought I may as well follow up on my previous post incase I am on the right track and it helps some one down the road. I still think there may be something I am missing but I hope not as I need the machine up fairly quickly in order to complete the jobs I have and satisfy account receivable. This time of year you know how that goes...

At this point I am not sure who this post is for myself or otherwise. But any constructive input would be appreciated. Thank you in advance.
Top

Mori was fairly consistent with the turret-position sensor patterns (except on the SL-0, there the pattern is reversed because the turret is mounted backwards). Yes, in general two out of the five or six sensors are triggered in each turret position.

How the PLC program reads the sensors, and what tool position it reports when it is not getting a valid pattern (i.e. appears to be between positions) varies with different PLC programs.

Whether the PLC does a final reality check after the turret is locked back down, to guard against stopping prematurely with a spurious input, varies with different PLC programs.

So, unless you choose to post a Report so that others can see what is in your PLC program and what is in your tool-change macro, you are mostly talking to yourself here.
Top

Thank you for the reply. Hopefully I have now attached a report. Let me know if there is trouble viewing it. Every time I start thinking I am seeing a pattern that may indicate something my symptoms change slightly.

In the I/O Diagnostic screen I have determined the following.

I know the above could be determined by reading the PLC programming. But I have not delved with PLC programming other than a few ladder logic basic power points I've had to watch and test on for a job. I do not feel I gained a great deal of understanding of the topic and did not find myself needing it. I have looked into it with Centroid a bit a few years ago when I got the machine. Although the topic is interesting and would be useful now...

Thank you for any response or useful insight. Also if there is a problem viewing the report let me know.

I did not write your PLC program, but whoever did write it incorporated Mori Seiki turret code that I wrote for an SL-2 nine or ten years ago.

The current turret position (W26, "TurretPosition_W"), on which step (5) above depends, is set by code in MainStage, ca. lines 3205-3230. This code reads all five sensors at once, as if they were a 5-bit binary number, with the lowest sensor in the least-significant bit (i.e. EDCBA). For example, per the pattern you quote above, the T4 position has sensors A and D closed. That would read as 01001. Interpreted as a binary number, that is 9 (8+1). Therefore the PLC code includes a line that reads "IF Temp_W == 9 THEN TempPosition_W = 4".

The PLC code uses intermediate/temporary variables in that section, because it is only going to accept a new pattern it sees as the new turret position, if it sees the same pattern on two successive scans of the PLC (20ms apart). This is to ensure that when going, for example, from T6 (B&D) to T7 (C&E), if the sensors are too close together and the PLC briefly sees D and C closed while B and E are open, it will not falsely conclude the turret is at T3.

Each of the steps in the ATC sequence above (turn on an output, wait for a response) has a time limit, and an associated error condition. For example as you have seen, in step (7), if the coupling is not aligned and the turret fails to clamp down, then control stops with "8124 ATC error: Turret Lock Timeout".

There are also two monitors in NotMaintenanceModeStage. One checks that the pattern of the sensors matches one of the eight known turret positions. If the control ever goes more than two seconds with an invalid pattern of turret sensors, a "9080 Fault: Invalid Turret Switch Position!" fault will be triggered.

The second monitor in NotMaintenanceModeStage checks, when no tool-change is in progress, that the current turret position matches the one it is intended to be at. If not, a "9081 Fault: Incorrect Turret Position!" fault will be triggered. This is primarily intended to catch situations where in steps (5), (6) and (7) above, the turret somehow locked down at a position different from the target.

I see in your message log that you have, at times, gotten both of those faults. Some of those occasions may have been while you where moving the sensor components around; others may have been genuine turret indexing failures.

If it sometimes goes too far to lock down, and other times does not go far enough, when previously it ran reliably, that would suggest inconsistent response time in stopping the motor and starting the lock-down process. Perhaps the turret unlock/lock solenoid is sticking intermittently.
Top

Thank you so much for your input! I purchased this machine already converted and 99% completed. Only small things like vfd tuning, adding work lights, touch screen and an update for ridged tapping have really been needed since I have owned it. I do need to change the brake resistor so I can improve my spindle braking still. But that is something for another day. I have run it for a few years with only very rare turret misses. Maybe a few times a month if that.

I have noticed a variable in that occasionally it will now index seemingly properly and I have to force the inputs to unclamp and re-clamp because the turret clamped Input is not lit on the I/O diagnostics screen. I have been unsure of how to process this. I had been leaning to thinking the Hall effect sensor is failing. But the end of the day yesterday and today I noticed a noise that seems to correspond with the unclamping cycle. It sounds like fluid noise like an sssss sound near the turret. I wonder if the actuator or solenoid is more likely the culprit. I have only noticed this sound maybe 3 times.

It currently seems to index one tool position at a time reliably. But If I index 7 tool positions at a time it seems to struggle with positioning. Usually if there is an error is is between positions on the curvic coupling and I can pull it the rest of the way into position as it has not quite traveled far enough. However tool changes from 3 to 2 which is a 7 tool move always results in a move too far and it looks to be about the same distance every time and it is a full position (maybe 2? on the curvic coupling).

And you are correct this machine uses a 3 phase motor to index and the clamping and unclamping are hydraulic. I suppose I will try to see if there is a hydraulic pick up screen I can clean. And maybe flush hoses? Most likely culprit is likely the solenoid I would assume?

The machine does seem to always display "311 Waiting for memory bit #21 M101" alert on the control at every tool change still.
Top

Tool 2 seems to be the only one to move too far. And there is no clear pattern in the diagnostic board between the tools that sometimes don't index far enough and 2 which travels much too far. I will also pull the Turret locking solenoid and inspect for issues. Though any time I have had solenoid problems on equipment in the past it is usually more clear cut.
Top

The "311 Waiting for memory bit #21 M101" message is simply a status update, not a warning or error. It means that the tool-change macro is waiting for the PLC program to report that the turret index is complete.

If you were to add a cncxmsg.txt file that included two lines similar to this:

... then that message would be displayed instead.
Top

Well the spool valve for the turret clamping has tremendous scoring. Hopefully this is the problem and not just a problem. Thank you again for your help! 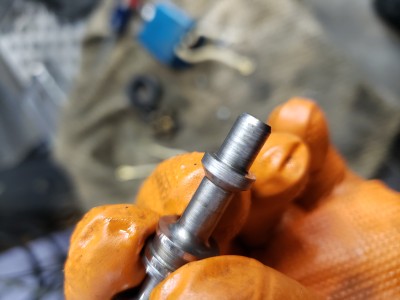 cncsnw wrote: ↑Fri Nov 25, 2022 4:27 pm The "311 Waiting for memory bit #21 M101" message is simply a status update, not a warning or error. It means that the tool-change macro is waiting for the PLC program to report that the turret index is complete.

If you were to add a cncxmsg.txt file that included two lines similar to this:

... then that message would be displayed instead.