I’ve been working to get the fourth axis together on my antique M400 machine. It was working fine when I originally bought the machine (well used) in 2018, but I never had a job for it and blew up the servo drives (SD3 and SD1) in 2019.(I think my solar system was the culprit, I regularly see 257 volts, now I have everything transformed down) I had the drivers repaired and since then the fourth never worked correctly. To be fair I didn’t even try to hook up the fourth until over a year after I got the drives back. I believe I have narrowed the issue to the encoder, which might have been wiped out in the overload incident. When I run the “move sync” and turn the encoder the counts are correct, but the commutator counts like 1-2-7-7-6 I never see 5 and I guess it’s combining the 3 and 4…? I can’t find any real name brand or info on this encoder, it’s on the LeeDan 750W servo motor, which is driving a Centroid branded 5C fourth axis. I have gotten the servo working two or three times for a period of 5 min or so and end up with a “A axis commutator” error - unsurprising. I’ve tried cleaning the encoder disk using electronics cleaner (can make it worse at this point!) to no avail. I’m afraid the issue is electrical/electronic.

So long story to get to the question- is it possible to obtain a replacement encoder which will plug right in with the existing micro plug? Or even better is there a known company which can repair the encoder I have? The best solution to me would be to find a whole new servo, ideally a more modern unit which has better waterproofing and smaller pancake style form factor so this thing takes up less space on my crowded shelves when not in use! If I cannot get a plug and play encoder for the existing drive and I’ve got to figure the wiring out anyway I would prefer to have a much better servo as this LeeDan is kind of a POS to begin with and at the end of its life anyway. 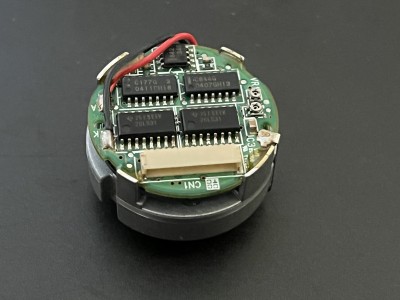 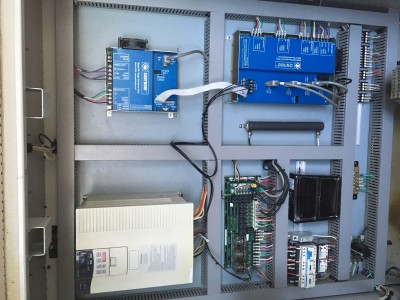 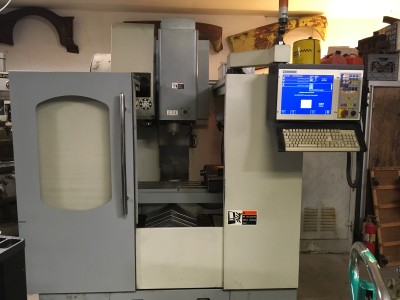 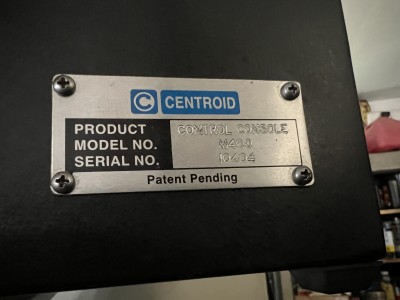 Well, here's a quick update - both good and bad news.

I ordered a new encoder from Centroid - installation was relatively easy, ran the move Sync and got the encoder lined up and everything works great.

Until I power the machine down and boot back up.

The machine will not home if the 4th axis is enabled. A quick check of the move sync shows the encoder to be wildly out of calibration. I can then re-calibrate the encoder, perform the homing and run the fourth. I even ran a fourth axis engraving program posted from fusion using a Haas Post.

So - Did I receive a faulty encoder? Is my wiring messed up? Is my servo motor damaged?

One more, I'm running CNC10 Version 1.27, which I understand is pre-historic. The only available feedrate control for the 4th is Degrees/min.

I also understand inverse time was implemented in version 2.39 or something like that.

Is it possible to upgrade my software version to one which has support for inverse time? Or is there a post available for F360 which will post multi-axis feedrates which are compatible?
Top

When it "does not home", what does it do?

If the encoder alignment changes from day to day or hour to hour, it is probably because the encoder disk is slipping. Next time mark the encoder hub and shaft, and also mark the orientation where the encoder index pulse appears (asterisk is displayed on the PID Configuration screen). Next time you find it is out of alignment, check those marks.
Top

Not sure what you mean by this. Encoders are not calibrated. They have a set number of lines and therefore pulses per revolution. Is it possible the new encoder was an upgraded version with more resolution than the previous one? If so, just go to setup/config/machine/motor and input the new encoder counts per rev for the axis with the replacement encoder.
Cheers,

So I think the encoder was slipping on the shaft during rapid moves. I realigned the encoder using the move sync and tightened the piss out of the screws, it holds alignment now.

The servos on my older AC Servo system require quadrature commutation from the encoder - as I understand it, this tells the servo drive what angle the motor's rotor is at relative to the stator so the drive knows how/where to move the juice going to to motor. So the encoder must be aligned with the magnetic poles of the servo. There is a section of the PID tuning menu which applies constant power to the motor holding it aligned with one of the poles - you then clock the encoder using feedback from the system and tighten everything down once the system says it's aligned. It's a super sensitive adjustment, I think I have to hit it within .001 Degrees (10/8192?)

When I start the machine up and initiate the homing cycle it will not complete if the 4th is active. Now I can disable the 4th, home XYZ, then activate the 4th, mess around with some move sync routines, turn off the fourth and turn it back on and it works okay. I imagine this has something to do with the 4th not having any limit switches or homing triggers - but I should be able to power up the machine and have it just ignore the homing on the 4th.

In the motor parameters page the home and limit inputs on the A axis are listed as 0, and 0 - which I would expect, there are no limit switches on the 4th. A homing routine I would expect on an axis without limit switches like this would be to manually jog the drive to a spot within 10 degrees of the "0" on the graduation ring in the positive direction, then initiate the home sequence which would roll the motor until it finds the "key" spot on the encoder, then roll back the encoder count specified between the key and the mechanical home.

I mean I'm thrilled to finally have the 4th working somewhat, and jumping through some hoops to get it started isn't the worst thing ever. I can cut with it so long as I re-indicate the fixture in each time I power the machine down.
Top

In the most recent report you posted, your homing macro says:

Since the commands to home A in the plus direction, and to set A home there, are commented out, running the homing routine will not set home on the A axis. If A is enabled, the control will not consider the machine to have been homed. The machine is not homed until all axes are homed.

If your rotary table has no home switch, then I recommend that you delete the (commented-out) M92/A line; and that you uncomment the M26/A line.