Thanks for the info. I’m in the process of working through the mechanicals. so far I found a loose pully on Y and one of the thrust bearings was not so good. So I’m replacing the bearings on both X and Y and putting new belts on as well. I’ve also checked the encoder mounting.
I wonder if there is the possibility that the problem is in the control?
I appreciate all the help and ideas.
Thanks
Top

You clearly found some mechanical problems, so their is no point speculating about a control error at this point. It is very important to use the proper angular contact bearings with ball screws. Without good mechanics, all bets for good accuracy are off.
Top

I wonder if there is the possibility that the problem is in the control?

Very unlikely. You have a closed-loop, torque-mode control. The positions shown on the DRO are a very reliable indication of the motor shaft angle.

As tblough pointed out, if you had a bad encoder connection that was causing dropped counts, you would get either a "412 ... encoder differential error" or "455 ... encoder quadrature error" message.

If you center the probe in a bore two different times, and get two different results on the DRO, then you can reasonably assume that the probe is centered, but that the motor is turned a different amount. The only way to make that happen is to change the mechanical relationship between motor rotation and spindle position.

As polaraligned said, there is little point chasing improbable software/electronic ghosts when there are mechanical issues to explain what you are seeing.

If you want to chase the improbable anyway:
1) Zero out your backlash compensations while testing. Then, the number on the DRO will exactly represent motor rotation.
2) Locate the bore center, repeatedly under different conditions, using a dial test indicator instead of the probe. Then you don't have to wonder about the probing algorithm or probe-trip repeatability.
3) Immediately after finding home, scribe marks on the motor shaft, pulleys, ballscrew end, and table/saddle interface. Use these marks later to see whether subsequent homing commands return to the same location.
See http://www.cncsnw.com/PosLoss.htm
Top

It's been a while, I've been in the background putting new bearings on the x and y ball screws. I still have new belts on order.
Today I put it back together and reset the backlash and turns ratio I also did an auto tune on the servos. I then ran a test part out of wood with the program that I had issues with. the part ran fine, I ran it about ten times with no issues. I then set the part up I was machining when I had issues It's 4140 I ran it at only 0.5 depth of cut and ran this through with no issue. when I ran it at full depth of cut 7mm. It all went bad as you can see in the pic's. I rechecked the position of the part with the prob and it turned out to be ok. So the part hasn't moved.
I'm at a loss, The things that I've noticed that I think would not affect the part are. The collar on the end of the prob was loose and it stoped working so I screwed it back up. It now works but I need to look into this a bit more. Also the time in the pc is wrong.

I don't understand how this could be so far out without there being an alarm.

If the power supply for the servos was not good enough could this cause this to happen if the load was to high on the bigger cuts. I didn't look at the load on the servos.
Any ideas would be welcome 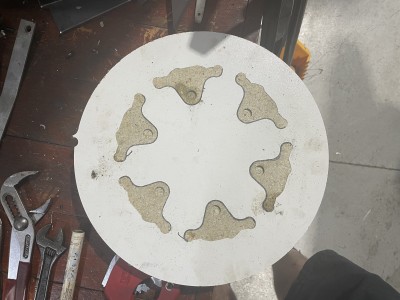 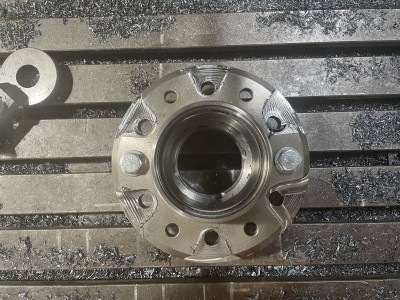 Clicking on the picture to zoom in, the picture rotates. Looking at that picture I notice that it looks like the bottom 2 pockets and the upper right pocket are too wide, and they are too wide to the same side of the picture, which I am guessing is the Y+ direction. The shape of the cuts seems to confirm that the problem is in Y axis. If there was a mechanical problem, it would be on this axis.

What order were these pockets cut?

After making the cut at full depth, did you run it again making an "air cut" to see if it followed the correct path, or was still following the incorrect path? Just trying to see if the problem only appears under load, or if once the problem appears, it stays with further cutting.

If the motor is not in the position that it is expected to be, you certainly should get an error.

The first pocket is the 8 o'clock the second is the 10 o'clock Y is to bottom of pic. If you zoom in you can see the shallow cut I did first on all the pockets except the first one which is right. The one that has the deeper cut is when it came to do the finish cut and the end mill pulled out of the holder a bit. That is when I noticed it was wrong.
Thats the x and Y servo from the machine when I got it. The power supply is the original. That's the rectifier I've used.
The servos have been retrofitted with centroid encoders and new wiring.
Right from when the machine was first set-up the Y axis was always slower than X. I figured it must have been because of the extra weight of the x on top of it'd own weight.
When I first picked up the machine the main issue was with the Y axis. hence the retrofit.

I'll get more pics of the machine in the morning. 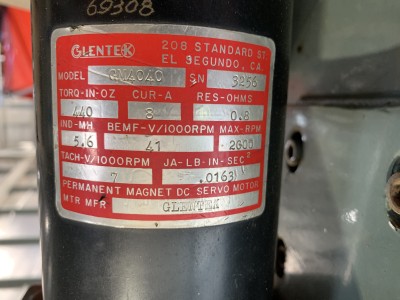 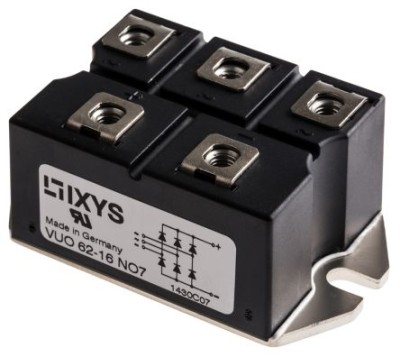 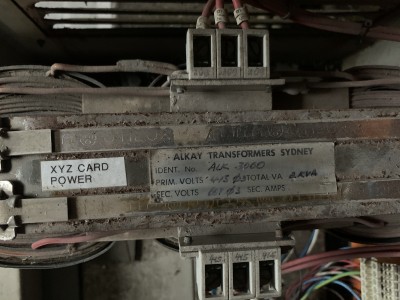 So you are running this on 3 phase, have a 2 Kva transformer, and 27.5 in-lb servos. That is plenty for a knee mill.

What was the original issue you had with the Y axis? Just trying to figure if there is a relationship here as Y appears to be your current issue.

How so your load bars on the CNC12 screen look when making a decent cut? How about when just jogging?
Top

When I first got the Mill it had a fagor control and y would not move and then would move like it was trying to catch up.

I wasn't watching the load on that cut but in the past I've run 5mm depth of cut with a 63mm face mill with 75% engagement and rarely high feed. The 10hp spindle was more the problem.
Y seems to run higher load just in rapid and its slower than X. Also the load is higher in one direction than the other.
I don't know how this compares to other knee mills but the crane driver who unloaded it said it weighed about 4.5T.
Top

Wow. That is a big machine. More like the size one expects from a bed mill rather than a knee mill, unless you meant a bed mill in your first post. Maybe the motors are a bit undersized, I can’t answer that, but the control certainly should show an error if it can’t reach position.

I would run some test cuts to see the exact conditions this problem appears and if it is always in the same direction.
Top

If this is indeed a HUGE knee mill (Series II Bridgeport is less than 1T), I'd check for looseness in the knee. This definitely feels like a mechanical problem. Since the encoder is connected to the motor, the control is not going to show errors. The motor is moving to the correct position, but the iron is not.
Cheers,

Tom
Confidence is the feeling you have before you fully understand the situation.
I have CDO. It's like OCD, but the letters are where they should be.
Top
Post Reply
27 posts