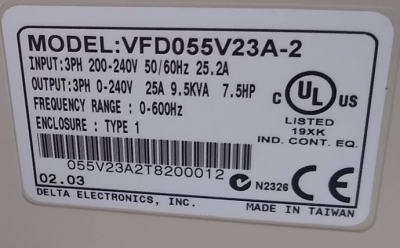 What I am having a problem with now, is that Input 12 (Zero Speed Input) is turning on and off after the M19 Spindle Orient is completed.
Spindle is not moving, but as you watch the Actual RPM indicator on CNC12 it is staying zero but I noticed the +/- signs flickering next to the 0. The flickering was corresponding with the flickering Input 12 (Zero Speed Input). I put my fingers on the spindle, while I could not turn it, I could also feel the spindle almost "dithering" as if it were a servo. In fact this might be what it is doing? Since the Orient input to the VFD is active and the spindle looks for the proper position and attempts to hold it there.

In checking the Spindle Analog output while this was occurring, it was rock solid on the motion controller output as well as the Analog input terminals on the VFD.

Reminder, I am running the control and the VFD single phase. This was not a problem with the old DC3IO system and there were no issues with the older control system. The VFD has its encoder card an ENV-PG01L

Link to the Delta VFD manual:https://www.galco.com/techdoc/dlpc/vfd150v23a-2_um.pdf

I wouldn't have thought I would have needed to change a thing on the VFD or "Tune it" since it was working fine with the old Centroid Control.
Working with a VFD with encoder board and "tuning" is new to me.

Thanks in advance for any advice. Current report attached.
Marty

Re: Tuning a Delta VFD-VE with encoder card

I wanted to provide an update. I *think* I have resolved the issue

I found Tech Bulletin 250 (Delta VFD-VE Inverter Setup procedure for Y-Delta Inverter), which tipped me off to a reference toward the end of the document on Trouble Shooting Spindle Orient. It suggested if the spindle is hunting or "oscillating" when trying to hold the orient position, to change VFD parameter 11-11 Zero-Speed Bandwidth from 10(default) to 20 and save it.

I had trouble getting into Parameter Group 11. (This is not explained in the TB250)
FIRST you have to enter "2" into Parameter 00-02 to be able to access the Parameters in Group 11. Once I did that, I had access to Group 11 Parameters. On the advice of TB250, I increased Parameter 11-11 to 20 and tested. It didn't make any difference, I could feel the spindle oscillating in my fingers after doing the M19 Spindle Orient in MDI. The Zero Speed input was still blinking on and off. I increased to 30 and it was much worse. SO, I REDUCED it from 10 to 5 and that seemed to fix the problem.

There is another Tech Bulletin, TB229 for the Delta VFD-VD to set it up for ATCs. These two documents are very helpful.

I am glad I found TB250 with the Troubleshooting steps for issue I was having. It does make me scratch my head as to why the issue wasn't noticeable with the old Centroid Control