Too late. LOL Got right to it after work today.

Video of PID screen as requested.

Something new is my limit switches indicating tripped upon startup. They worked fine a few weeks ago. I can reset them in the I/O page.

Well, it took too long to upload so I decided to upload it via cable from my phone and the BB is not liking the format. Here's a vid of the PID screen. I realized too late that there was another screen "encoders" after that. I'll try to get that uploaded. Never mind. Apparently this BB doesn't like mp4's. Any other suggestions to get a video uploaded?

Mark,
Nevermind. Right below you can see the X and Z are showing differential errors. The 100 and the 110. They should be all 000 if there are no diff errors.

Thanks Marty and Polar!

I'll upload to YouTube first, next time should that need arise. I'm glad you all can make sense of the error report. So thankful to have this resource available to help us!

Did some private emailing with Polar and had great success.

A little back ground, first. My encoders are attached to the ball screws via a toothed belt. Everything I understood said that they needed to be attached in order for everything to operate properly, but for safety's sake, I left them off. After discussions with Polar, I learned that the only way everything could communicate properly is if they are all attached, so I installed the belts.

Before powering anything up, I swapped the Y axis power leads as that was the one running away. I powered it up with my hand on the EMO button and Z ran away the moment I hit a key. Powered it down, swapped those power leads, powered back up.

Everything worked as it should, with a couple of small issues. I can control all axis movements with the console (hand jog and MDI). The MPG does not work yet, but I only tried it briefly. Not sure if there are more settings that need to be gone through.

As everything was working fairly well, I decided to check the limit switches. Z works fine, in that if I hit either one, top or bottom, I can use the opposite button to drive off of the limit switch.

X and Y limits work to kill the power, but I can't drive off them using the console. I have to physically crank the screw. The screen will show that it's released and I can then drive with the console.

The X axis was running backwards, but I remembered that there was a setting to change that direction. I did, and it's running right.

This is Polar's response to my issues listed above:

I assume that your limit switches are wired separately, that is + and - each run to the Allinone and they are not in series? *** Mark note, yes, that is correct**** The usual problem when you can't back off the limit switch is that the limit input settings are wrong for the + and -. The machine moves X, for example, in the positive direction and hits the limit switch. In order to back off it needs to know that that is the positive switch. If it thinks it is the negative switch, it won't back off because it thinks it is going to go in the wrong direction to back off. These are changed on one of the setup pages...I forget which one off hand and don't have time right now to look, but I believe it is on the page where you changed the axis motion direction. The inputs are 1,2,3,4,5 and 6. Just try swapping the numbers in the + and - column for the axis that won't back off.

The stall detection won't let the system operate if there are encoder errors, but it was worthwhile to get the system running to this point.

I'll be sending him two of my encoders for testing again. Only one is working consistently.

I got my encoders and cables back from Polar. One encoder was bad and he repaired the cables that I had fabricated. My sincere thanks for that again. Bought another encoder from Automation Direct, reinstalled everything and it's working great.

I got my limit switched sorted out, and they are working fine. I have been busy tidying up my wiring.

I was actually able to home the machine but the registers did not go to zero when it was done. The pic shows where the numbers when it finished. I recentered the axes, powered it down, brought it back up, and rehomed it, same numbers. How do I get them to read zero?

A friend is working on a schematic for me to get my spindle running manually. I should be able to start making parts very soon.

My MPG is not working. I bought my MPG after I had passed over the instructions on page 29 and just found them again this morning. Should this fix that issue or is there something else?

I didn't think to save an error report. I can get that tonight if it's needed. 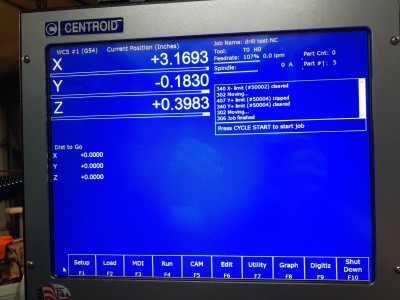 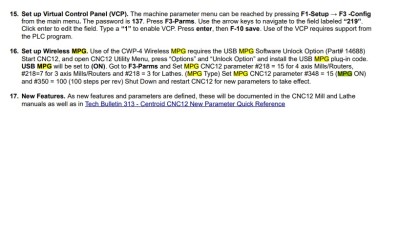 After the M92 and M26 commands in your homing file, you can do a G92 to set the G54 coordinates to zero. In my homing file I do G92 Z0 with the quill retracted, and I send the X and Y axis to the center of travel and then do a G92 on them. It really doesn't matter if you do the G92 to zero the position because you will be resetting the part zero anyway once you are ready to start cutting, but I like seeing them at zero after homing