Spindle will not respond to an M3 command

Spindle will not respond to an M3 command

Picture/video is worth a thousand words, I took a few videos to explain what is happening.

I can turn on the spindle manually to do skim cuts and setup tooling, but the spindle will not work in a program, I can put "M3 S1000" in MDI and nothing happens.

History if it helps:

Was apparently bought from a school before I got it.

I got this lathe off craigslist, After lots of troubleshooting, I found a fiber cable had been broken before I got it and after fixing that, the controller started working (Could not see the PLC before then) After that, the Turret was out of alignment, After buying a parts manual for the diagrams, I found someone had reinstalled the turret off a spline, got all that figured out and thought I was home free..

I downloaded a Post for fusion and drew up a very simple part. This being my first attempt at a CNC lathe I was just going to do a test cut in the air. It started moving the tool to where it starts cutting and just stopped, after I while I figured out if I rotated the spindle by hand, It would move in (it was reading the spindle position - CSS)

I did run the "pawn" program that was in the c drive and it acts the same way - rules out a post processor issue.

I remember before I fixed the turret, I ran one of the programs on the hard drive and the spindle turned on, but for some reason it is not now, I have taken apart the "computer/controller" a couple of times to try and figure out if I could add a MPG, but put it back together and it work's fine other that this issue. I was an IT pro as of 6 months ago, I know my way around computes, been doing that for 15 years, I cant think of anything I did that could have caused this issue.

At 0:47 in your third video, you can see that (once you gave it auto spindle control) OUT14 turned green, and several of the outputs in the range OUT17-OUT28 also turned green.

OUT14 is the spindle run relay.
OUT17-OUT28 are the 12 bits of your analog spindle speed reference.

Regarding (1), there are fuses for each output on the PLCIO2 unit. If the fuse for either OUT14 or OUT15 is blown or missing, then the circuit would be interrupted.

Your next step should be to locate and identify your spindle drive, and find out how its control circuits are wired. Then you would be in a position to check with a meter to see whether the drive is getting the run-forward command; whether it is getting the analog voltage; and whether it is configured for remote (rather than local) control.
Top

Sorry, I did not watch your third video all the way through before posting.

I see that when you started the spindle in manual mode, you also chose to run it in reverse (CCW).

What happens if you try to start it forward (CW) in Manual mode?

That probably narrows the problem down to the forward-run command wire, from the OUT15NC terminal on the PLC, back to the spindle drive.
Top

M4 s1000 did work, I am not sure Which direction it is supposed to run physically, but this seems backwards of what it should do. When I run M4, it spins in the correct direction for the tooling to take a skim cut (Forward in my way of thinking), I was thinking m3 should do that? So this shows M4 does work correctly, but M3 does not. I'll look at output 15 and see if I am missing a connection somewhere. How do you know Output15 is for the M3 command? is that in the report file somewhere?

Thank you so much for getting me this far, if nothing else, for now I can run programs using the M4 command to start the spindle.
Top

Should I be able to turn on the spindle using an M3? If so what output should that be using? if so, is there a way to change the output the controller uses for an M3 in case that particular output is bad? How do I find the output that M4 is using?

I am assuming if I am stuck with using M4 (Is it possible a previous owner had this issue and simply rewired the machine for M4 to turn the spindle the correct way and simply ran using M4? ) I should be able to just use it in leu of M3 (it turns the right direction to use all of the turning tools using an M4)

I am assuming this would make rigid tapping impossible unless fixed? Would this cause problems anywhere else?
Top

CW and CCW are judged standing behind the headstock, looking through the spindle towards the tailstock. M3/CW/forward is the direction you would turn a standard twist drill or advance a right-hand tap.

On lathes with the tool turret in back, with cutting edges up, most normal turning cuts are done with M4/CCW. Drilling with a twist drill on centerline would, of course, require M3/CW.

Attached is a generic T400/AC/PLCIO2 lathe schematic, which shows how spindle control is typically routed through OUT14 and OUT15.

Schematic attached for this system K30030.

(We pride ourselves on providing timely solid technical support but, without good information we may not be able to help and/or reply until such information is posted.)
Top

Since your spindle run-forward and run-reverse signals appear to go through a piggyback contact block on top of the emergency stop contactor, that would be a likely place to look for failures.

So I jumped back on this when I got home and found the VFD that runs the spindle is setup incorrectly I think, still trying to wrap my head around the way this thing works. They also jumpered "34 out to 15 com" and "34 com to 14 com" Any Idea why they would have done that? I thought about removing these wires and trying it then. Any Idea what 34 out and com are for?

You can se the wires jumped here: 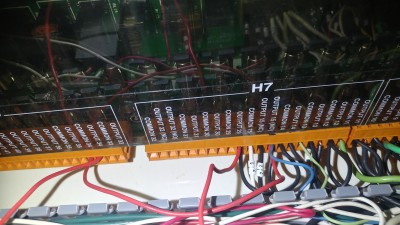 This is from the VFD Manual: I circled the current setting in red, what I think is should be in green:

Here is another Picture, Traced the Fwd and Rev and common (From the Spindle VFD) to the shown locations.
Fwd is highlighted in Yellow
REV is highlighted in Green
Common is blue- there is an arrow pointing to it. 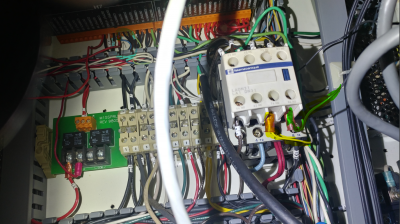 Are these relays simply shorting to common? Do either of these carry any voltage to the VFD?

I also dont understand why the wires to the VFD are on the contactor shown in the last picture, is there a reason they are not connected to the PLC directly? The Blue (Common on the VFD) is connected directly to the PLC, but not the FWD/REV wires, it appears to be a simple switching action that the relays should do perfectly fine without a contactor between the PLC and the VFD? Is this for shielding electrical noise from the PLC maybe?

Thank you so much for all the help, I am starting to think I may actually get this thing running soon!
Top

So yes, when you turn on the spindle, OUT14 connects whatever wire is connected to its "COMMON" terminal through to its output terminal, and the jumper wire carries that signal over to the COMMON terminal for OUT15. If OUT15 remains inactive, then that signal continues through to the OUT15 NC (normally-closed) terminal, i.e. the white wire #71. That is the forward (M3) condition. If OUT15 is active, then the signal from OUT14 gets closed to the OUT15 NO (normally-open) terminal instead, i.e. the black wire #72. That is the reverse (M4) condition.

The "voltage" that gets "carried to the VFD" comes from the VFD. As the picture from the VFD manual shows, you make the drive run by taking a wire from its "COM" terminal, and connecting it over to the VFD's "FWD" or "REV" terminal.

What is the make and model of the VFD?
Top
Post Reply
14 posts