It has been a while since my last update. Although, I have spent all my spare time working on this project!

Tool change seems to be working OK. I think the orient is close enough. If it becomes an issue there is an easy mechanical fix that will lock the spindle when the tool release lever comes down. A problem for the future...

I have been still battling furiously with motor drives. DMM and I have conceded that the DYN4 will never drive my motors nicely. I decided to remove the drives and got my hands on a second hand set of ABB E190 drives, one of the only drives I could find that will run these motors. Everything else has proprietary encoder signals these days. Anyways after paying $1800 for three drives and $180 for connectors, it turned out they were missing the memory card which was another $1500, so I cancelled those drives and returned all the parts. Just too expensive given the risk. So the time has come to abandon the motors.

1kW DMM motors are on the way. DMM are super confident they can meet my control targets with their motors. God I hope they work!!! Fitting them is going to be bit of a mechanical mission and involves, slotting the motor mounting holes, re-drilling the mounting holes on the machine in place and fabricating some panels as there is not enough room for the longer motors. At least I can put the old motors back on to the old controller and use it for my next project.

So, while I wait for motors to arrive, I started working on the control panel. As normal, I didn't do it the easy way. I want it to look in style with the machine and didn't want the "PC beside the machine" look. 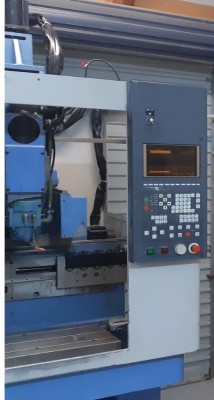 Below are some pictures of the new assembly. I have a 17" touch panel display that will be mounted vertically. The jog panel and MPG will be flush mounted. The MPG is in a pocket so you can remove it if you want. At the bottom of the panel are two USB connectors. For using a USB dongle or plugging in a keyboard. The control has no physical keyboard or mouse. I have been running with this setup for all of my programming and testing and it works fine (although I did use a physical keyboard for the bulk programming). I will probably just leave a wireless keyboard dongle plugged in and have a keyboard in the cupboard for the odd occasion. 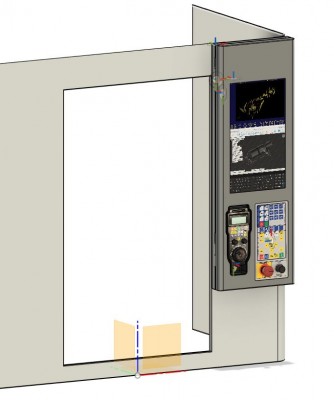 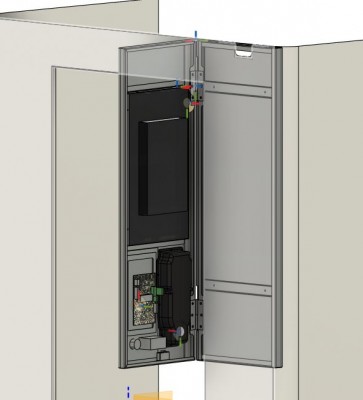 I was going to make the flush MPG holder from sheet metal as a simple box but then decided to 3D print it. You will only see the very edge of it. If the print doesn't work out, maybe I will machine it from billet for fun if I ever get the machine working! 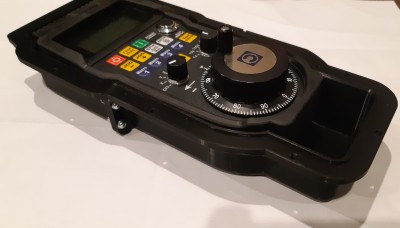 I just need to get all the parts laser cut now. I am pretty sure I will cock up the folding but will give it a go and see what happens!
Top

So, its time for the next installment... This one has been a huge mission. After a huge battle with DMM drives and my motors, I gave in and bought second hand ABB servo drives for $2000 USD. It turned out they also needed memory cards and connectors which was another $1800 USD so I canned that idea and returned them! I ended up sucking it up and buying a set of DMM motors under the promise from DMM that "We have never failed in a CNC application". Really f'd me off having to replace a perfectly good set of motors with ones that needed modification to fit, but it was the easiest way out!

The DMM 11ADST 1kW motors turn out to have the correct 19mm shaft size and 130mm locating spigot. They are a larger frame than the OEM motors and longer. The shafts are also 3mm longer.

The unfortunate part is that the bolt holes are misaligned which is kind of awkward! A bit of checking shows there is enough room to move them outwards.

I made a drilling template with spigots for the different drill sizes and tap and went to work drilling. The X motor is not so accessible and involved a right angle drill and some lost skin!

The mounting holes on the motors needed to be moved outwards by 2mm. Doing this made me pretty nervous!

And eventually after a big wiring job, motors all installed. The Y motor is too long to close the machines back door so I am going to have to modify the door which is a PITA as it is all nicely powder coated.

And my fourth DMM firmware update (PCB swap). Life would be much easier if they could do in field firmware updates like every modern piece of technology. But I eventually got the control cabinet all rewired.

With that all set up, I redid the home switch to index pulse relations. All set to exactly 1/4 turn back from home switch. Ran an auto tune on the motors. Then rechecked the backlash settings. It turns out my Haimer is not at all suitable for doing backlash adjustment. It does not respond to movements less than 0.01mm. My cheap Chinese micron dial gauge is great for this job. Check out this video. Each division is one micron (less than 1/2 a tenth). The backlash setting was only 0.0025 (one tenth) so seems too good to be true. I will redo the backlash after the machine has run for a while and spread the grease around a bit.

All up to make a template, drill, modify motors, update the drives, rewire the machine and control panel, reconfigure, test and set everything up took a good 25 hours. And after all is said and done, the drives are still f'ing faulting on full speed rapid moves and still cannot be properly reset with the external reset pin (a bug in the code, only some faults can be reset). The acceleration is stable now which could not be achieved on the old motors, but it still faults at full speed. I guess DMM is just not up to the task of a high speed machining center!

I also tried increasing the acceleration in the Oak to be like the OEM controller but I don't think the Oak uses S curve acceleration. If you wind the acceleration time down sure it gets up to rapid speed fast but then it starts banging on small moves, even during homing.

I can now get back on to my user interface panel build!
Top

Asheman,
I thought at 240V the Dyn4/servo was capable of 5Krpm?
What drives are faulting? All of them? Have you talked to Stephen at DMM about it? He may suggest regenerative resistors on them to absorb the energy.
Also, did you put a line reactor ahead of the DYN4 drives to condition the power?
DYN4 drives are not of the highest quality, but it is also understood they are not on the higher end of the price range either.

Hi Marty, I have exchanged over 150 emails with Stephen at DMM. Pretty sure he has had enough of me! I can't say a bad thing about their service. But I am.not so complimentary about their drives.

The problem is there are no cost effective generic drives on the market. All the cheaper drives require using their motors. And the more expensive ones are crazy expensive.

The DYN4 drives fault on lost position. The drive is probably capable of much higher RPM but its position control doesn't seem to keep up! I have spent eight months trying to get these drives sorted.

I don't need a line filter where I am and power supply is not an issue. The drives can decelerate a full speed moving carriage at a much faster rate than I need so shouldn't need braking resistors.

I just wish they would allow all the settings in the drive to be configured and tuned and have some useful real time diagnostics. You have to scope the position error output analog signal which means mucking with the cables all the time. If you could enter motor data and tune everything they probably would have worked fine on my old motors.

I runs fine at 15 m/min but I really wanted to get back to 24 m/min like OEM. So it is working but is a bit slow.
Top

Have you looked at these drives? Tech support is excellent.
https://www.a-m-c.com/
Top

I hadn't seen those ones. I will look into them out of interest but I am committed to these DMM drives now I have installed their motors.
Top

Time for another update. I have the motor faults finally sorted!!! It turns out that the DMM supplied motors cannot reach high RPM at the 200V I have to work with. That was a bit of a kick in the guts given how clear I was before purchasing about my target RPM and voltage I have! Anyways, I can reliably achieve 2200 RPM (22m/min) on X and Y and 2000 RPM on Z. Not the 2400 I wanted but you have to know when you are beat! If I ran a 240V supply then I could get 2400 RPM, but that isn't an option at the moment.

I am still battling some motion issues, so not quite there yet on motion control! viewtopic.php?f=64&t=6181

In the mean time I have been working on my control panel. I finally got my new folder set up and built a radius bending attachment for my old folder and got everything all folded up.

I had intended on attaching some of the parts with JB Weld rather than spot welding so you wouldn't see marks in the front panel. But after a few tests, it just isn't going to work. It breaks so easily, just by hand! I did several tests and even with a coarse ground surface it just does not stick to the metal. I tried Araldite, Selleys no more nails and Loctite Super Glue. Araldite was identical to JB Weld, but they are both epoxies. The Super glue was the strongest but I am still not happy with it. I think I need a good polyurethane glue. Any ideas?

Thanks, I thought the same as it looks perfect. But I cant find anywhere to buy it here in NZ. Half the country is on lockdown for a while yet! I think it is also only available in tubes that require a special gun and disposable nozzles?
Top
Post Reply
67 posts