Does anyone know if the Oak will communicate with the Parker S.B.C. drive model LVD5? I've searched the forum with no reference to this drive. It's a A/C servo drive that I am unfamiliar with that is made in Italy I believe.

Here's a link to the manual:
https://www.rgbautomatyka.pl/en/p/file/ ... MANUAL.pdf

My current machine uses the Acorn controller with my closed loop steppers so I'm only familiar with the Acorn and know very little about the Oak board. Any help would be appreciated.

Link would not open but I did get to practice my Polish!
Top

When I click the link it downloads the PDF manual for the drive. It's 103 pages. Not sure what's happening. Let me try to find it somewhere else.
Top

Here's another link to some basic specs, it's not the users manual. This opens a PDF. The drive is the LVD5 that I have questions about.

While the analog reference and encoder signals look suitable, the drive-enable input and the drive-okay output both appear to use positive logic (active high).

You would need an intervening relay for the enable signal; and either a similar relay, or perhaps a pull-down resistor plus modified PLC logic logic, for the drive-okay signal.

These things would be slightly easier to introduce if you used MPU11 and GPIO4D, but you could do it with the Oak as well. You would just need to bring the Oak axis interface cables to a breakout point (while taking care to maintain shielding and signal integrity as much as possible).

It is possible that somewhere in the drive parameters there is an option to configure the enable signal differently, but on a quick glance I did not see reference to such capability.

Thank you for the feedback and I appreciate you taking time to research and reply but I think there is some confusion here with the drive model. It's a LVD series drive not the SLVD series drive. These drives are on a machine from the year 2000.

I attached the drive manual since my links may not work for some.

The interface details appear to be the same.

You will still need some type of interface circuit (e.g. a relay) to convert Centroid's negative-logic enable signal to Parker's positive-logic one.

If you use an MPU11 and GPIO4D, you can use the positive-logic drive-okay signal as is. If you use an Oak, you will need to construct some kind of interface circuit for that as well.
Top

Thanks again for looking at this. A simple transistor circuit to invert the signal would work, no? I'd prefer this over a noisy, mechanical relay.

I've honestly never seen the MPU11 or the GPIO4D stuff before. I'll take a look at it. I was only aware of the Acorn, Oak and All In One hardware.
Top

a solid state relay should work without being noisy ?
Top

Yes, it should be possible to invert the logic with a transistor circuit.

MPU11 is the control board, introduced in 2009, which is the basis for Allin1DC and Oak. Its functions are incorporated into Allin1DC and Oak, but it is also still available as a separate board.

GPIO4D was introduced with MPU11, as a combined PLC I/O board (16 inputs, 16 outputs, plus analog spindle speed output) and 4-axis analog-mode third-party servo drive interface. It was the standard way to control third-party drives until the OpticDirect was introduced in 2012, and the Oak in 2015.

Both OpticDirect and Oak were designed around Yaskawa and Delta drives. They greatly simplify control interface wiring, but at the expense of flexibility.

Below is a picture of a Fadal VMC6030 cabinet that I retrofitted in June. MPU11 is at upper left; GPIO4D is at lower left. Relays for converting the drive-enable signals are above the I/O expansion board to the right of the GPIO4D.

In this case, the drives were enabled by default and required an active pull-down to disable, so the function of the relays is to disable the drives through normally-closed contacts. When GPIO4D enables an axis, it activates the relay, releasing the drive-disable circuit. 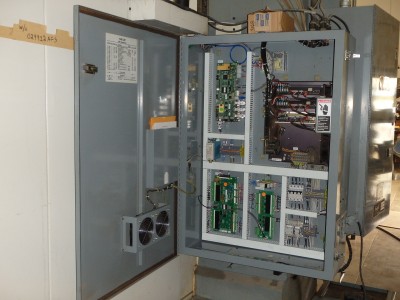