I bought this old Haas a few months back. It's really clean for it's age but has been stripped of all it's controls. It came out of a community college up north. Story is the spindle drive went bad and they surplussed it. The guy I bought it from stripped the controls and had planned on retrofitting it with Mach3/4 but never got around to it.

I had a little trouble finding servos that fit in place of the old DC servos. The X-axis doesn't have much clearance for anything bigger than the skinny DC servos. DMM offered to build some stretched out versions of their 86M servos with a 1kW rating. I probably could have used a bigger one on the z-axis but decided to keep them all the same.


The cabinet as of today:


It's a bit of a mess right now. The drives aren't running right so I've been wiring and re-wiring trying to get that sorted out.

The spindle drive is a GS4-2015. I haven't powered it on yet. It might actually be the last thing I get running as the gearbox pump & cooler and spindle bearing lubrication should probably be running before I mess with that. I'm planning on using the old shot pin spindle orient for now. I wasn't really considering the GS4 can't take encoder input when I bought it. AD talked me into it as it was the only thing they sell that can run a 5+hp spindle off of single phase.
Top

So far I have managed to get the servos and Oak bench tested okay. The servos won't take the GEAR_NUM=8192 & LINE_NUM=4095 for some reason. Following Marty's video and setting them to 2000 seemed to work fine.

The bench testing of the Oak came to a halt when the contactors pulled in and the servo drives faulted out. I have them wired pretty much per the DMM diagram but I have a seperate line reactor on each drive. I also omitted the filter on the power lines. 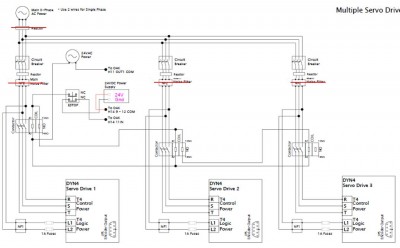 One ore more of them usually fault out as soon as the contactors pull in. I have snubbers on the contactors. I added shielded logic power cables yesterday. Here are some pics of the power distribution:


On power up, with just logic, they are lit green with no errors. As soon as the Oak pulls in the contactors one or more will turn red and fault out. They can't be cleared with the e-stop either. Power cycling the logic via the breakers will clear them and then they usually run fine. I can play around with them, induce encoder errors and clear them with the e-stop usually. Every now and then an e-stop will cause one of them to fault. Checking the drives with the DMM software will always show an over current fault. This one can't be cleared without power cycling for some reason.

I thought I had found the problem last night when i discovered an error in the cable wiring but sorting that out did not fix it. It did cause the motors to turn the right direction though, so I guess that's an improvement.

The issue seems to be getting worse the more I play with it. At first, after the initial power cycle to clear the faults they would seem to fun forever. I have been getting intermittent vibration and humming from the contactors. Seems to come and go as I cycle them. The transformer is putting out 26vac and seems to be rock solid even when they all pull in. In fact I've checked all the voltages in the cabinet and none of them seem to budge when energizing the drives.

I think I've been staring at it for too long. I'd love to hear any ideas on things to try to narrow this one down.
Top

When you did your bench test, were you able to run a G code program in a loop or did you try?
I will tell you, I am more following a Centroid "Generic" OAK Schematic. I am not using multiple reactors, nor am I using a reactor. I am using one large Estop relay rather than multiple relays, I am using ONE filter for logic power to the drives, though one for each drive isn't a bad thing.

When you did your bench test none of the issues you posted surfaced?

Sure is a clean machine, I hope you get things sorted out.
I would almost back track back to a bench test of ONE drive and ONE motor connected to OAK and nothing else but logic power....
Frustrating I know. But you need to know that the cables that DMM supplied you and the drives you got have the most up to date firmware.

I will try and get back on my FADAL soon and report my results....
Reminder, for support please follow this post: viewtopic.php?f=20&t=383
We can't "SEE" what you see...
Mesa, AZ
Top

I didn't try anything in a loop like that. I issued a couple of commands using MDI and it worked fine. That is, once I had power cycled the drives to clear the fault.

I think I'm going to re-wire the upper left (typo) part of the cabinet. It wasn't all planned out very well as the noise filters were kind of an afterthought. I've been wishing I had put them right above the drives so I will do that and move the contactors up under the line reactors. That will at least prevent the logic wiring from being mashed right up against the contactor coils. Also thinking I will terminate logic power shields on the filter grounds instead of the drive ground lug. Then I will start over at square one bench testing the drives and Oak and so on... I have nothing but time at the moment so I'm actually grateful to have this mess to tinker with in the garage.

As far as the extra pieces and parts: I had originally bought that large reactor for the drives but then I started thinking about a future 4th axis. It wasn't big enough for 4 drives so I decided to go with individual reactors, which meant individual breakers and noise filters.... I expected to have some issues with line voltage as my house is terrible. The garage has a separate service which is proving to be rock solid so maybe all those reactors were a waste anyway.
Top

Well I rewired the drives. The logic power is being routed through my spare contactor so I can play with the timing and turn it on and off easier.

They seem to fault out anytime logic power is applied for very long without the motor power. If I wire them all to come on together it seems to be happy until I hit the reset button on the VCP or e-stop for more than a few seconds. Cycling it seems to be fine, but 30 sec or so of no motor power and the faults are back.

I decided to try running both motor and logic power through the e-stop. I knew I would loose my encoder but this is what DMM recommended a while back and I just want to get it working. I didn’t think about Oak seeing the encoder errors and not energizing the e-stop relay. I think I remember that encoder errors can be suppressed but it seems like a crappy solution.

I just tried another run with the e-stop switch controlling the logic power directly (took Oak out of the loop) and left motor power routed through the Oak. That sort of works. I can clear all the errors through a combination of the e-stop and reset button now.

I kinda feel like this is turning into a cobbled up mess. If I could find a Yaskawa servo that would fit it there, I’d really consider ditching these servos and drives.
Top

Did you check to see if you are getting a momentary voltage drop when things happen? Also, DC power supplies when power is applied, draw a huge amount of amperage. This can cause problems, so the power should be applied only when the circuit breaker is turned on.

I can't see anything going on there with my fluke. It only shows ~0.2v drop when I power all the drives at once. It's probably not the best measurement tool for that but it's all I've got at the moment. I have tried powering them up individually and sequentially with no difference in outcome. I also took all the DC power supplies offline that I wasn't using just in case they were pulling the 240 down that's running the 24/120 transformer. I would think that kind of a problem would show up when I first power it on, but I'm having most of the problems after power on when removing motor power via e-stop or the VCP reset button.

Here was a suggestion from the manufacturer:

Hey Sam, I think it could be some timing problem between the contactor and servo drive Enable,

When the OAK is ready to enable/control the drives, it turns ON the contactor and Enable at the same time, so if this timing is not correct, it could cause a problem,

Try re-wiring so the contactor is not controlled by the OAK enable. So the power to the L1/L2 and RST to the drives is all applied at the same time.

Or try taking the contactor out all together as a test and see what happens. So both OAK and servo drive is both fully powered at the same time, but drive is Disabled so no power to motor. Drive is enabled when OAK is ready to enable the motor.

I don't think I can control when Oak enables the drives or pulls the contactors in so I'm not sure where to go with that. I haven't taken the e-stop out all together as that last sentence would suggest. I guess Oak could control enable and reset without the e-stop contactor but it seems like a bad idea for anything other than an experiment.
Top

The ABB Microflex drives I use on my lathe OAK and MPU11/GPIO4D conversions have both motor power (230VAC 1Ø) and 24VDC logic power on at all times. The motion controller switches the enable on and off as needed.
Cheers,

tblough wrote: ↑Fri Apr 03, 2020 8:21 am The ABB Microflex drives I use on my lathe OAK and MPU11/GPIO4D conversions have both motor power (230VAC 1Ø) and 24VDC logic power on at all times. The motion controller switches the enable on and off as needed.

I guess I've been assuming I have to have the motor power run through an e-stop contactor, but if the enable is working like it should...maybe that's not an issue.

I'll give that a try later today and see what happens. My only fear is that if it does get an over-current fault, I won't be able to reset it without power cycling the logic. I may end up with 2 e-stops for this machine...
Top
Post Reply
36 posts