Checkout the ProbeApp V3 User Guide for details about all features.

What is ProbeApp (Skip this Section if you know ProbeApp already)

The ProbeApp is an add-on for CNC12 that provides an enhanced, very user friendly Touch Screen User Interface for all kind of probing cycles specifically designed for CNC12 driven Routers and Mills. These are some of the benefits of the ProbeApp:

The main screen hasn’t changed much. The former "Tool Offsetter” cycle has been renamed to “Tool Library Mgr” because that’s what it really is. Most of the new Touch Probe Calibration and Trip Map features are behind the Gear Box icon on the bottom left of the main screen: 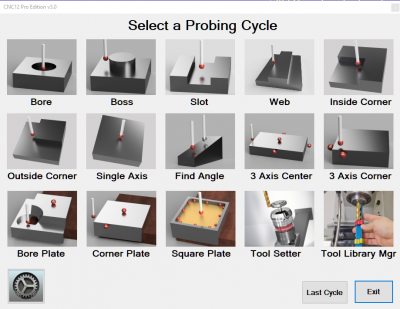 The focus of Version 3 has been on testing and improving Touch Probe accuracy.

These are the functions that have been added (click the link to read the corresponding chapter in the User Guide):

Most manufacturer of Touch Probes will publish the repeatability of their product which is usually within a couple of micrometers which seems to be very impressive but this is only a small part of the whole story if you want to know what actual probing precision you can expect in real machine operations. If you measure the same feature multiple times and you get the same result within a variation of just a couple of micrometers, it really doesn’t tell you anything about the accuracy of the measurement, it just tells you that your machine can repeat the same measuring errors very precisely. If your repeatability is very bad, you will know for sure that there’s something wrong with your touch probe or with your machine but if you would like to know if great repeatability is in fact equal to great accuracy, you have to dig a little deeper.

What impacts the Accuracy of a Touch Probe

Most mechanical Touch Probes used in the DIY space are based on a design like this: 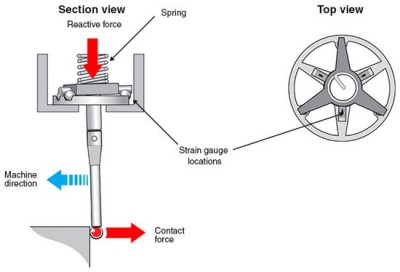 What seems obvious is that the center of the probe stylus ball must be concentric to the center of the spindle in order to give accurate measurements. Most touch probes do have adjustment screws to achieve this very important calibration. It’s also well known that a probe stylus will have some pre-travel distance from the moment the ball touches the surface and the point where the trip signal is actually being generated and this is caused by the geometry of the 3-leg trip mechanism and the deflection of the probe stylus. This pre-travel distance is compensated for by calibrating the probe stylus ball diameter which will always be a little smaller than the nominal diameter of the ball.

What is not so well know is the very important fact that the pre-travel distance can vary significantly based on the direction the probe stylus is being tripped. This again is being caused by the 3-leg design of the trip mechanism that has a significantly different trip force around a 360 degree circle. The required trip force in the area of one of the 3 legs is much higher than in the center area of two legs. Based on my measurements of some popular touch probes, the trip force difference between the lowest and the highest trip force can easily exceed 50g of force. This trip force difference alone can already generate significant probing errors based on the length and thickness of the probe stylus being used. If you would like to know what deflection variation 50g of force can cause on your stylus, plugin your stylus data in this Deflection Calculator and be surprised. This is an error that cannot be easily accounted for with any type of calibration.

Calibrating a touch probe is usually done with a Ring Gauge that has a well known diameter and a Bore probing cycle and if the calibration is done correctly and the machine has no mechanical issues, the repeatability of measuring the diameter of the ring gauge should be within a couple of micrometers. The issue with a Bore cycle is that the first probing cycle is always along the X-axis to find the center of the bore. The actual diameter measurement is always made along the Y-axis. Now if you are curious if you would get exactly the same diameter measurement along the X-axis, you can do a quick test like this:
[listAt the end of the Bore Cycle, the probe tip should be at the exact center of the bore. Now run a Slot Cycle along the X-axis][/list]
Get a better Picture about your Machine’s Probing Accuracy

In order to get a good picture about the real world Probing Accuracy you can expect on your machine, ProbeApp V3 has now a Trip Map Generator. You will need a Ring Gauge (or some kind of bore with a well known diameter) and a Center Finder. With the Center Finder in the spindle, you will adjust the X and Y-axis position so that the center of the spindle is exactly concentric with the gauge bore. You then switch out the Center Finder with the touch probe and start the Trip Map Cycle. This cycle will move around the 360 circle of the bore in a configurable step size of 1-45 degrees and will record at which point the trip and un-trip signal occurred, calculating the error between where the trip occurred compared to where it should have. 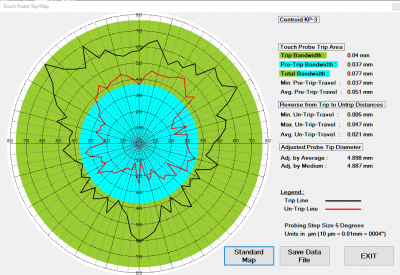 This Trip Map clearly shows the impact of the 3-leg design of the trip mechanism. As most of the probing moves are made along the X and Y-axis, you can see on this map how important it is to find the best possible position of how to place the touch probe in the spindle to average out the trip band error on both sides of each axis. It is also important to make sure the touch probe it mounted exactly the same way for every probing cycle.

ProbeApp V3 now comes with a Touch Probe Calibration cycle that will make the calibration process of the pre-travel adjusted probe stylus ball diameter very easy. Normally a Boss Cycle is being used for the calibration process and as explained above, the Boss Cycle always uses the probing cycle along the Y-axis for a bore-diameter measurement. If you’ve done the Quick-Test as described above, you might have determined that the measurement along the X-axis shows an error compared to the diameter measurement along the Y-axis.

The Touch Probe calibration cycle does give the option to calibrate for diameter accuracy by just taking into account the measurements along the Y-axis or you can choose to average out the diameter dimension variation between the X and Y-axis for better averaged overall measurement accuracy: 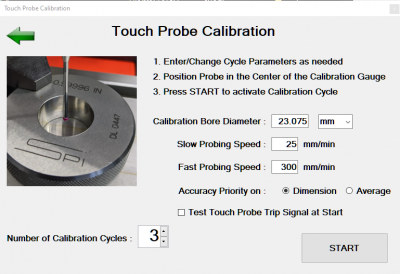 If the pre-travel distances of your touch probe differ significantly between the X and Y-axis probing directions, you might consider the Precision Probing Method that is now included in ProbeApp V3. 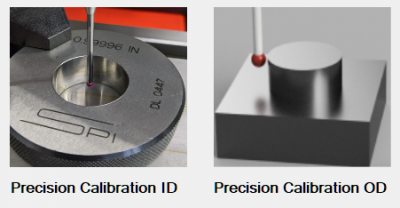 After a Precision Calibration has been completed, the measured pre-travel distances for each side will be displayed. The values can be adjusted manually if further fine-tuning should be necessary: 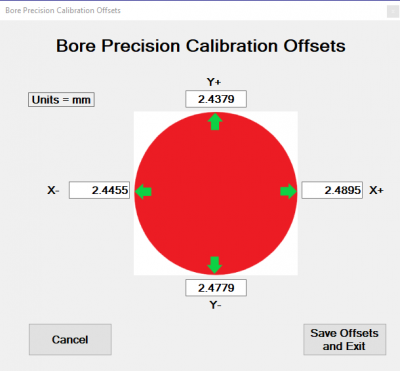 
Most Touch Probes (TP) and Tool Touch Off (TT) devices don’t have any significant pre-trip-travel in the axial direction so touching off a TP on top of the TT is not a problem in many cases as it doesn’t matter if the TP or the TT is generating the trip signal as long as both devices are connected at the same time.

If a control isn’t wired to allow the simultaneous connection of the TP and TT, then it needs to be determined which device has the weaker spring load as this will be the device that will generate the trip signal and just connect that device. This can be tested by placing the TP by hand on top of the TT, push down the TP slightly and see if the stylus of the TP moves up or if the plate of the TT moves down. In most cases, the TP will have the weaker spring than the TT.

Now a problem occurs when the TT does have a pre-trip-travel distance and the TP is creating the trip signal. The offset measurement will be incorrect by the amount of the pre-trip-travel which can be significant. As an example, the very popular, wireless DT02 is such a device.

The configuration screen now allows two different options to handle this situation. The first option is to configure the exact pre-travel distance of the TT that will be used to adjust the position when a TP touches off on a TT. The second option is to configure the full pre-travel adjusted TT height and force a manual touch off of the TP on the base surface where the TT is placed on: 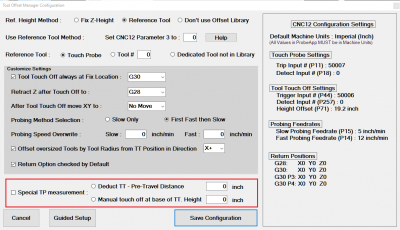 
The ATC Module is integrated into the ProbeApp-Tool Library Manager and can be activated with a license update. The Rack-ATC Module supports Fork/Finger as well as Drop-In Type racks positioned along the X or Y Axis and on the front, back, left or right side of the table.

With the Rack-ATC Module activated, the Tool Library Manager will expand with a Bin# Column as well as ATC specific Function Keys: 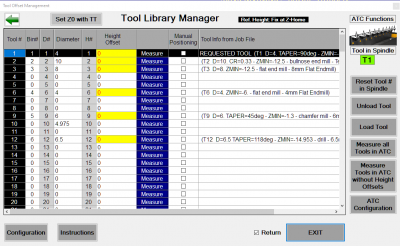 There’s one simple ATC Configuration screen to fill out. The Rack-ATC module will auto-generate all script files needed for proper ATC operations 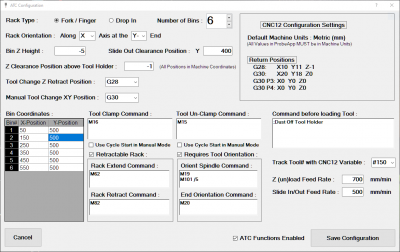 Stay tuned for more updates on this ATC-Rack Module.


How to get the ProbeApp V3

At the moment, ProbeApp V3 is still a non-profit, donation based product. You can make a donation in the amount that is reasonable to you for this App.

If you have any questions or comments, please post them in this thread for everybody to see.

What's the process for updating from an previous ProbeApp version? Can that be done directly through the ProbeApp? Or should we also reach out to you via email just like a new user?
Top

What's the process for updating from an previous ProbeApp version? Can that be done directly through the ProbeApp? Or should we also reach out to you via email just like a new user?

I have sent out a download link for the new version to existing supporters. Contact me if you haven't received an email.

There's no in-app upgrade function as many CNC PC's are not connected to the Internet.

Would it not have been better to send an email to Swissi as per the instructions?
Cheers,

The hours and commitment required to make something like this happen, especially from one person, are huge.
Top

Please forgive me. I'm new to the Centroid family. Just purchased the Acorn and plan to hopefully in the near future get it integrated into my Onefinity cnc router. Is this "ProbeApp" a download or something already in the CNC12 software? I'm assuming it's probably not included in the free version but maybe the Pro version?
Top

Amazingly, the first nessage in this thread answers all your questions.
Cheers,

tblough wrote: ↑Mon Oct 04, 2021 8:14 am Amazingly, the first nessage in this thread answers all your questions.

And you are right. It was such a long thread that I didn't happen to see it in the last part of it. Thank you.
Top
Post Reply
8 posts • Page 1 of 1