I've had this issue for some time now, and am finally at the point where its driving me nuts and need to figure it out and correct it. I don't believe this issue is Acorn related, but would appreciate anyone's thoughts or suggestions.

The Issue:
The Z-axis of my machine "hunts" for the proper position before finally stopping. See this video for an example. https://photos.app.goo.gl/SYNwrPpqm1v1Pa54A

History:
I previously had issues where my original Z-axis servo motor (SDSK-2321S-RLN) would randomly trigger faults. Using the Scope feature in the MSP software, I learned that the faults were from torque overload. I worked with one of Teknic's support engineers to make sure the tuning was correct, which it was. The final "solution" we came to was to replace my Z-axis servo with a more powerful one (SDSK-3421S-RLN). The theory behind this was the smaller servo just couldn't handle the load of the Z-axis plus the router spindle. I'm still not convinced that was the real issue though, as countless other Avid CNC owners use weaker non-servo motors just fine with the same spindle attached to their Z-axis. Regardless of that though, the larger motor solved the torque overload fault issue, but I'm still having issues with the Z-axis "hunting" whenever being moved to a new position. 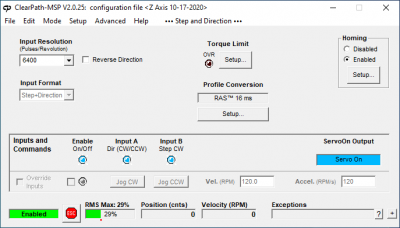 Screenshot of motor configuration in MSP

Since you have the RLN version and not the ELN version, try to set your input resolution to 1600 and see if you notice an improvement

29% torque usage at idle is pretty high. I would use the autotune a couple more times on that axis

You may have to install an air or spring counterbalance to offset the weight of your spindle. Or a brake,
GCnC Control
CNC Control & Retrofits
https://www.youtube.com/user/Islaww1/videos
Top

I switched the input resolution to 1600 both in the MSP software and in the Acorn Axis Configuration, but saw no improvement. I've gone ahead and switched it back to 6400 as the only adverse effect in doing so per that discussion you linked is a reduced top speed, which is fine by me. Thanks for the suggestion.

You may have to install an air or spring counterbalance to offset the weight of your spindle. Or a brake,

I re-ran the autotune again, and didn't see any improvement. I then started messing with the Fine Tuning slider in the MSP software, and increasing the "stiffness" pretty much eliminates the hunting entirely, however certain positions will cause the Z axis servo to squeal constantly until its moved again. heres a video demonstrating this. https://photos.app.goo.gl/f3jWkonzgfDxNRxx9

I'm starting to wonder if my Z-axis is binding, or somehow misaligned. I recently found a video on youtube where someone documented their problems with an Avid CNC Z-axis. I had not realized that these Z-axes already contain a drag brake at the bottom. Could it perhaps be adding too much resistance and causing the servo motor to have to fight harder than it should to hold position?
Top

The Z-pivot of my machine "chases" for the appropriate situation before at long last halting. See this video for a model. google
Top

stephens0 wrote: ↑Mon Apr 05, 2021 10:12 pm The Z-pivot of my machine "chases" for the appropriate situation before at long last halting. See this video for a model. google

Stephens, your link just goes to google, and not a video

I think completely solved this issue.

I jogged my machine up in Z as far as I could, and then peeled back the lower dust cover to take a look at the Z axis drag break. Everything looked fine, but I decided to loosen and then re-tighten the two set screws that secure the drag brake to the end of the ball screw just for the heck of it.

After doing that, the "hunting" had magically gone away. I re-ran the autotune one more time for good measure, and then repeated my dial indicator tests. No hunting, and if I set the fine tuning slider in MSP to maximum Stiffness, no more horrible loud squealing from the servo. It also appears that the torque % usage on the servo when the Z axis is idle has improved. Doesn't seem to go over 20% now.

Thanks everyone for your helpful suggestions. I suppose the main takeaway from this is to not assume that your machine components come properly assembled straight from the factory 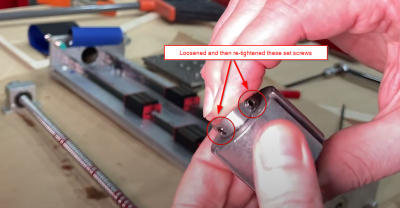 You make good points! Never assume the machine mechanicals are good, especially on a used machine.
Glad you got it sorted.
Now, show off your build in the Success Stories forum! Pictures, video clip of it doing its thing! (Upload to YouTube and share a link)
Marty
Reminder, for support please follow this post: viewtopic.php?f=20&t=383
We can't "SEE" what you see...
Mesa, AZ
Top
Post Reply
8 posts • Page 1 of 1