Your drive steps per rev are incorrect, from your pics of the machine it appears that the drives are set to 1600 or a microstep of 8. Your wizard shows you have the steps at 3200 on the axis config page. Did you change the drive setting? If not, don't, leave the drives at 1600 and change the wizard settings to 1600.

clear out input 4 and 5 from the wizard, leave them blank until you get motors moving and homing. Some of your inputs are inverted and that need to be addressed.

Is your e-stop really NO? Do you have it working?

You have a spindle fault error on the main page so the spindle will not turn. Maybe that output from the VFD is NO and no NC.

Your overall turns ratios are not correct but they are a good starting point. We'll increase your max rate and fast jog later.

Your soft limits are not setup.
Top

I don't doubt things are a mess. I changed so many things this weekend trying to get the limit switches to work for home. I just found a little comment in access pairing manual that NO switches cannot be used for homing. Only programmed soft limit settings should be used and limit switches are protection for overrun. With richauto limit switches were the home default, at least that is the way mine was and I was trying to set acorn the same way. Ok I will give up on that.
I did have soft limits set and working but making changes deleted them.
I will be starting all over setting things up.
Top

You can use NO switches for home switches. The Auto Squaring manual you are reading does not apply to your machine. Using the NO proximity switches are OK but not preferred. You don't need switches at the other end of travel, the soft limits work just fine. I would recommend you focus on setting the drive parameters correctly, get the machine moving in the correct directions and then move on to the home switches. Get those working and and not worry about all the other inputs and outputs right now. One step at a a time.
Top

Shawn, thanks for your help, home all is working as I wanted.
I need to review FVD a little more. 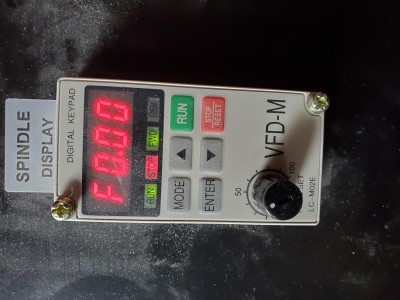 The green FWD light is always on.
I have no spindle voltage at H8 unless I push the green run button.
When I push the green run button The red stop light starts to flash and the green run light will lite up and the spindle will start.
The output relay 6 for VFD reset does not activate.
I will take a second look at the manual, but If you have a suggestion let me know
Things are coming together and I am getting excited to move on to the touch plate. I know, one step at a time.

Glad you are making progress Dave and glad to help.

As for the VFD, there is no reason from here forward for you to need to touch any button on the VFD control panel. It's it completely controlled by the Acorn. In fact you shouldn't be able to start it from the VFD control panel or control the speed after changing the pr.00 parameter. It's all done by the Acorn now. My VFD is buried in my machine cabinet and I never see it anymore. There is no more manual control from the VFD itself. You can manually control it from the VCP if you need to but I don't really see a reason why you'll need to.

Wire your Z axis touch plate (the CUT wire) to input 4 and set the wizard to "ProbeTripped" and then setup the wizard pages for the "Touch Devices". You'll need to measure the thickness of your touch plate for one of the settings. When you are ready we can go over the settings.
Top

I thought I would throw in a update on my project. Its been an interesting week.
First I want to say many thanks to Shawn for his help. His help was great.

Starting with the limit switches and my homing problem. Because I was getting nowhere with homing Shawn offered to access my computer (he really wanted to see the new version of cnc12) and I agreed. We found when powering down cnc12 wasn't saving settings. The conclusion was there was a corrupt file in cnc12. The solution was down load a fresh copy of cnc12 and install it which we did. That cured the loss of settings issue. I had purchased centroids computer with cnc12 already installed.
At this time it was decided we would use the Chinese axis drive type instead of the leadshine

Next was the problem of soft limits. CNC12 was allowing the gantry to move past the soft limits and hit the limit switches. After trying some different adjustments we figured out that the travel distance had to be entered for the soft limits to work properly. Something different in the new version of CNC12.

Tool touch plate was no problem. (even I could handle that one)

Next problem was spindle motor would not spin. I had everything wired to match the wiring diagram and set the parameters in the VFD. The router would not turn unless I pushed the run button on the VFD remote. Shawn found a parameter setting had been over looked, after setting that parameter the spindle motor was working.

Next Shawn programmed my park button for me.

Shawn, feel free to add any comment or correct any of my descriptions.
Shawn, thanks again for you help.
Dave
Top

Glad I was able to help Dave and together we got this going. I did want to see the stock "router" version of CNC12 as I have my own custom version on my router. Some cool additions for sure.

We started with the "Chinese drive type" and then modified it from there, it more closely matched his drive setting out of the box. It's of course been customized now to match his drives.

The Delta VFD on his machine is a 2 wire VFD (one for RUN and one for FWD) where I have only been familiar with one wire Chinese VFD's. Reprogrammed a few more parameters and it's spinning now under Acorn control.

I just edited his "park.mac" file and set the wizard to override the default behavior. Simple change for a different park location.

The e-stop on this Chinese import was certainly a strange one. I was stunned to hear it killed power to EVERYTHING and I mean EVERYTHING. I think the shop lights even went out when he hit the e-stop.

Wiring it to Acorn standards fixed all that and Dave got it working properly.

Good luck on fine tuning the machine Dave and let the forum know if you have any more questions.
Top

Spent the afternoon fine tuning my router axis. Next step was to make a basic cut so I went in to my aspire 10.5 and created a simple 4" square profile cut .25 deep. Selected centriod inc cnc pp (only inch listed) and copied the file to a thumb drive. Loaded it into acorn and all was looking good. Pushed the job cycle, the square image came up on the screen and the router cut me a nice straight line on the x axis .25" deep and 4 1/2" long. Subtract the bit diameter the box would have been the correct size. In the past when I have had this problem it has always been the pp. I will need to contact Vetric and see if they have an updated PP for acorn.
Dave
Top

Dave, please triple check the tool chosen when you drew the square has the proper diameter spec in the tool library. I have created new tools in Vectric software by "copying" another tool over and I forgot to change the tool diameter and ended up with similar results, a hole bigger or smaller than I anticipated. I know you have lots of experience with the Vectric software but mistakes can happen, ask me how I know.

Another word of advice with the Acorn software, after you load the file into Acorn, BEFORE you press the cycle start button it would be wise to get into the habit of pressing F8 to graph the cut first. This will show you any errors or axis exceeded issues before it's too late. I personally don't start any cuts without pressing F8 to graph the cut and it'll also tell you the run time for the cut.
Top

Ok, I will do my best to explain my problem and what Shawn and I did to figure out the problem. I will say we did not find a solution so I would like some input from the rest of you.
From the VCP everything works as setup. Home works direction works touch plate works Just no kind of problem.
I sent Shawn a copy of the job file (top of page) and tried it on his machine and it worked as designed. This should eliminate the processor or aspire software.
When I push F8 the graph shows no errors and it looks just like what I want. The job is a 4”x4” square with a .25 cut depth and center of board as my zero point. Graph shows starting point at center and moving bit to X- and Y- to plunge and start the cut. Photo:https://photos.app.goo.gl/zA52Kf8jpKdfNpQq9
When I push the start button a black screen opens up . Photo: https://photos.app.goo.gl/TjN7n9RvM1M8fTNr8

The spindle travels to X- and Y- plunges 1/8” (like it should) into the board cuts from X- to X+ pauses for a second and travels back to X- Y-pauses for a second ramps down1/8” moves to X+ and back to X- Y- retracts to home and is done. It does not ravel the Y direction during the cut cycle, only Y movement is from center of board to X-Y- for the start of the cut. https://photos.app.goo.gl/vFyVNyzsdASmeZQB7


We disconnected the spindle to eliminate possible frequency noise. No change.
What I see in the display matches what it is supposed to do. From the job program there is no Y direction movement.
I am thinking (hoping) it is just a line somewhere in the programing that forgot to tell acorn to read Y axis.
Dave
Top
Post Reply
86 posts