Show me your Custom VCP's!

Pete Rondeau wrote: ↑Wed Dec 09, 2020 12:31 pm I wish there was a way of running the VCP disconnected from CNC12 in standalone mode so that I could work with it on my laptop and work out my modifications at my leisure rather than standing at the machine.

no easy to do at moment, it needs a PLC connected to it (aka the acorn board).
Need support? READ THIS POST first. http://centroidcncforum.com/viewtopic.php?f=60&t=1043
All Acorn Documentation is located here: viewtopic.php?f=60&t=3397
Answers to common questions: viewforum.php?f=63
and here viewforum.php?f=61
Gear we use but don't sell. https://www.centroidcnc.com/centroid_di ... _gear.html
Top

It's basically just a macro that calls up a custom file for surfacing my table. The file asks for the depth of cut, does a little pre positioning for the cutter diameter and a fence along one edge, and then surfaces the table off in a rectangular path from the outside to the center.

That's great Scott, thanks for sharing. I may create a similar button to call up my surface program and move the gantry to my starting position. Then maybe have it start my auto Z zero script to determine the current surface height at it's highest point. If I recall my surface program removes about .02". Sometimes I need to run it twice depending on the spoilboard wear. This is good use of some of my blank space I have for extra features and buttons.

Thanks again for the idea.
Top

Here is our little VCP creation. Koodos to the idea of a surfacing macro I read in a previous thread entry it would be a great addition for us router guys/gals. 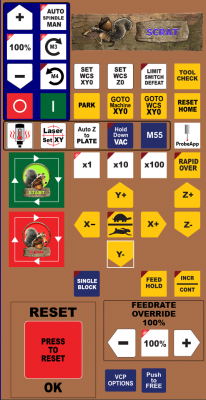 Is it possile to use CNC12 and VCP on a vertically mounted screen? With the VCP on the bottom area, and the mdi/dro/gcode field on top?
Top

Upgraded to 4.62 and had a crack at a VCP this weekend. Here's where I am so far:

I can see VCPs being both fun and useful (mine is definitely WIP), but harder to get going than I hoped, despite many re-readings of the relevant documents. Something like the 50% feedrate override button (down there next to Feed Hold) was always going to be difficult -- I haven't even started on that one. But even seemingly simple buttons like "Set X 0" involve non-intuitive "skin events" and arbitrarily assigned PLC program numbers.

You are directed to acorn_mill_plc.src to ferret out events that aren't in the VCP user's manual; just bring a ball of twine because you're likely to get lost in there. It's NOT as simple as assigning a "G92X0" macro to the button. Looking through mfunc49.mac (which sets a specified axis to 0, so a good starting point?), it seems like the PLC knows the X axis as an arbitrary integer "88" [EDIT: Ahh, 88 is ASCII "X". OK...]. Yeah, this isn't as easy as it looks. However, I shall act as a mars rover and persevere...

. Lots of reading and trial & error in my future.

Also: For me, the 4.20 to 4.62 upgrade was the most painful one yet. Nuked all my configs, but since I follow Keith's sage advice and take screenshots of all wizard screens before each upgrade, I was (eventually) able to recover *except* my MPG (CWP-4) doesn't work anymore. I thought it was because my Digitizing license got nuked, but it's still incommunicado after reinstating the license. Good thing it's so easy to revert to prior versions. I can still get work done while I figure it all out.

UPDATE: Wireless MPG now working. I ensured the wizard knew about it, but that was before reinstating the license, so it (silently) rejected my input and instead set MPG to "none". I had to go back to the wizard and re-teach the system about the CWP-4, save, exit, and restart. Now it works again, so I think I'm moving forward with 4.62.

thanks for posting your vcp.
there are 16 Auxiliary key that are easy to add/edit/modify/assign macros to
yes you need to install the license file before setting the MPG selection in the Wizard. this is true is you are updating or installing for the first time.
Need support? READ THIS POST first. http://centroidcncforum.com/viewtopic.php?f=60&t=1043
All Acorn Documentation is located here: viewtopic.php?f=60&t=3397
Answers to common questions: viewforum.php?f=63
and here viewforum.php?f=61
Gear we use but don't sell. https://www.centroidcnc.com/centroid_di ... _gear.html
Top

Latest revision, after another weekend of tweaking. Button locations and colors grouped according to function. Got all the macros working, and added swissi's probe app (just called "PROBE" on my VCP). The only thing that doesn't work -- and might never -- is the 50% feedrate override button. Any of you who have used a Haas knows of their Override section which is useful to choose quick preset override values. To get to 50% feedrate on the Centroid screen, I have to hit the button 50 times!! (or hold it down for a very long time, often overshooting; the whole thing takes too long anyway). I have rediscovered the "Feed" selection of the wireless MPG, so this isn't as much an issue anymore, but it would still be nice to have some feedrate pre-sets besides the existing 100%:

Report included in case someone would like to borrow from it 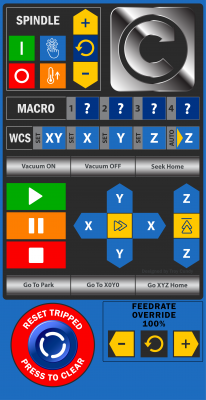 Just got done with a bunch of cleanup in my VCP, router mill here, and got rid of a bunch of stuff I never use, plus reorganizing.
Some specifics: 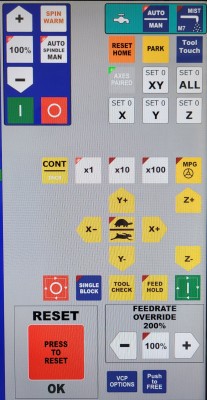 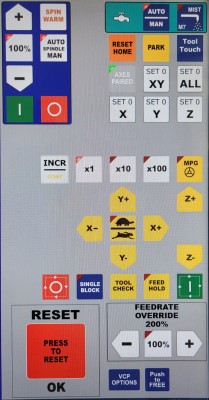