Need help integrating Sunfar E550 VFD with Acorn PLC.
I have been searching the web for information to feel the gaps and have been through most of videos by Centroid, which were vary helpful getting where I am today with my build.
Short description of core components:
3D CNC router table with Y-1800mm X-1100mm Z-200mm envelope. Y axis configured as Master and Slave.
All four ball-screws are driven by Teknic CPM-SDSK-3421S-ELS servo motors. Machine Auto Homes properly, DRO resets to 0 on all axis and complies with G-code through MDI.
Spindle utilized is JGL-100/3.2R24 and it’s running with no glitches in manual mode and I am able to run a G-code through MDI at the same time with no problems. Spindle is connected to VFD via appropriate shielded cable.
Acorn PLC is bench tested according to Marty’s videos at 3000 RPM set via Wizard.
Everything checks out just right except when I attempt to run the spindle in autonomous mode at it’s full range 0-24000 RPM utilizing 0-10 V output of Acorn PLC.

Observations: Servo drives introduce a jerking motions causing the router to lose Y-master and Y-slave squareness. DRO continues to count but no motion is observed on axis. Spindle itself is not spinning at full requested RPM according to setting in Wizard to 24000 RPM.

To be on the safe side I utilized Hall Effect sensors on all Home and Limit switches.

I have contacted Sunfar in order to obtain more info on proper connectivity of E550 VFD, but got nothing as of yet. My suspicion is that connecting Sunfar’s AI and ground ports are introducing some sort of interference to Acorn PLC board. As far as spindle X1-X4 controls I am able to control direction as well as START/STOP.

Any input will be highly appreciated.
Top

Arthur,
Did you do a search of these forums with the term Sunfar?

Also please explain how you wired the VFD to the motor and provide pictures of your control cabinet.

Sunfar is one of the better chinese vfds and are easy to set up. Like Marty says, post the manual, specs of your spindle, and pics of your setup
GCnC Control
CNC Control & Retrofits
https://www.youtube.com/user/Islaww1/videos
Top

I appreciate your responses. My apologies for not providing reference photos of my router earlier. I am new to the this forum and had no intention of cluttering it with my photos. As per request, see attached files below.

Yes, I did searched this forum and not only this one for Sunfar related info. Reading the manual of Sunfar E550 everything seemed straight forward, but as I stated earlier my problems start there. My spindle is connected through 600V Shielded 4 conductor copper cable. Pardon me for messy wiring. I am trying to keep it neat and it is not finalized yet. F0.00 is set to 1 to control the VFD externally using analog input and F0.02 is set to 1001 as per manual. I use X1, X2, X3, X4 terminal to control the state of the spindle. Acorn PLC spindle control output is connected to Ai and GND terminals of VFD: Positive to Ai and Negative to GND on VFD. All interconnection are done also using shielded 4 conductor cables 18AWG.

As I stated earlier, I don't encounter any problems running a G-code on the machine when my spindle is controlled by Sunfar VFD in MANUAL mode. I observe unpredictable behavior of my servos when I use the spindle controlled by Sunfar in autonomous mode controlled be Acorn PLC and CNC12 software. Bench testing of spindle control terminal of Acorn passes flawlessly set to 3000 RPM and readings of my DMM are corresponding to the required range set by Centroid. After configuring Spindle setting in Acorns Wizard to 24000 max RPM in autonomous mode I am able to control start and stop of the spindle but spindle speed stays in hundreds range and my Y axis servos losing squareness due to convulsive back and fort motions. My understanding is if there is an issue of electrical noise introduced by VFD, it should be present in MANUAL VFD mode as well. Problem occurs when I connect the PLC to VFD.

I received a response from Simphoenix (manufacturer of Sunfar) and there was nothing helpful. My concerns were +24V terminal and Vs terminal. There roll was not clear to me.

I also contacted Teknic for my SDSK Clearpath servos and they suggested me to use a pull up resistors on step and direction terminals and am currently waiting for delivery to do that. 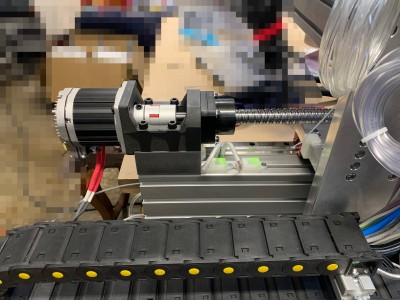 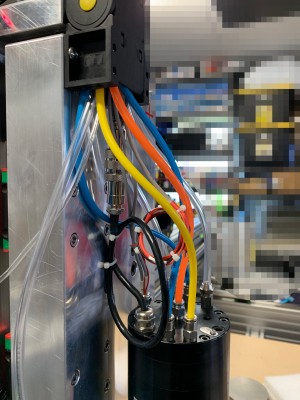 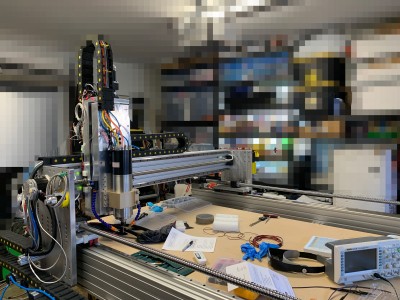 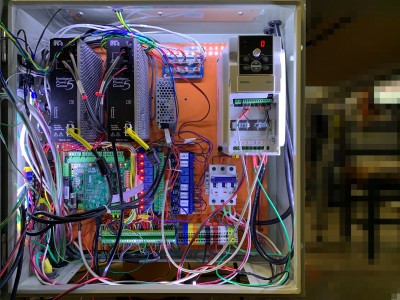 Are you saying that when you run the spindle from the VFD it seems to run fine.
When you are in AUTOmatic mode in CNC12 is where your problems occur?
What do you mean by: "my Y axis servos losing squareness due to convulsive back and fort motions."
Are you saying your Y axis is moving sporadically when no G code is running?

You have a shielded cable running from the VFD to the Spindle motor. Is the shield grounded on the VFD end (it appears so) and not the Spindle end?
If so, try grounding the spindle end shield as well.

You most certainly seem to have an EMI noise issue. I am not familiar with Clearpath Teknic SDSK servos, but I have heard about adding the resistors.
Just trying to give some ideas.

Will the machine run a G code program successfully and hold position if the VFD is powered off and of course, the spindle is not running?

When I run VFD in manual mode, meaning that I start and stop it from keypad of the VFD, it works fine and I am able to run a G-code from VCP. Only when I program VFD to be controlled by Acorn, I go to VCP, switch the spindle control to manual and start it, it introduces sporadic movement to Y-master and Y-slave axis. I don't even get to the point to run a G-code.

Yes, I do have shielded cable running from Acorn PLC to Sunfar VFD both ends connected to corresponding GND terminals. Spindle cable is shielded and grounded on both VFD and Spindle side.

Yes, machine is totally compliant with G-code, holds the position even with spindle is running, but only when my VFD is in manual mode meaning that speed is controlled by potentiometer of Sunfar keypad with Acorn PLC spindle control cable disconnected.
Top

Let's stop using the term PLC. Which stands for programmable logic controller.
You have a signal cable carrying the 0-10vdc analog signal from Acorn the VFD input terminals.
Please provide a link to the VFD manual and tell us which two terminals on the VFD you have it connected to.

Also try disconnecting that cables shield from ground on both ends. Just simply the two wires carrying the analog signal from Acorn the the VFD. Take a close up picture of the VFDs terminals and any labelling
Reminder, for support please follow this post: viewtopic.php?f=20&t=383
We can't "SEE" what you see...
Mesa, AZ
Top 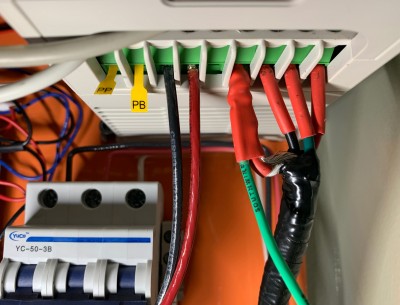 The green wire is connected to the chassis of the router and earth terminal of my electrical box. I also connected white wire to the shield in order not to leave it loos. Black, dark green and red wires correspond to U,W,V feeding the spindle.

On Acorn analog speed control terminals shield, black and brown wires are connected to common and orange wire is connected to Vout.

Finally, X1,X2,X3,X4 wires are connected to relays that utilize to control the forward, revers and start/stop. X4 is not used 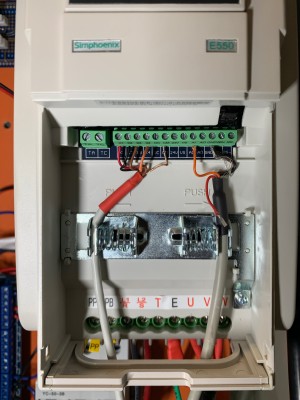 Here is the connection diagram from Sunfar manual 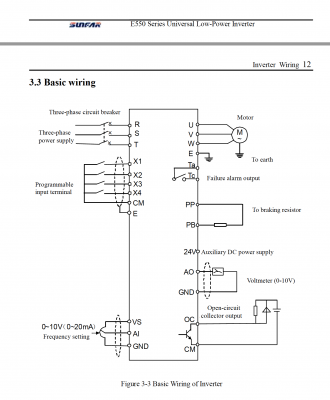 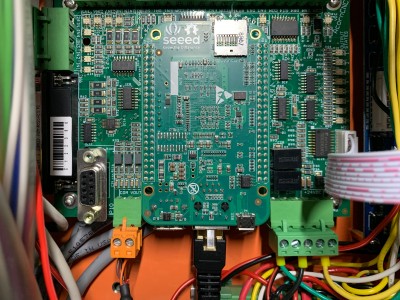 Get rid of that shield from the Ground on both ends and only use TWO wires from the Analog signal cable.
I would use the Black for COM and Orange for The analog signal
Reminder, for support please follow this post: viewtopic.php?f=20&t=383
We can't "SEE" what you see...
Mesa, AZ
Top

I did that, but got the same results. As soon as I press the green button on VCD to start the spindle it introduces sporadic micro steps into my Y-master.
I am expecting to receive 10Kohm resistors any time now to follow the precautionary steps by Teknic to prevent optical couplers acting up on me and it will give me a chance to troubleshoot the matter safely.
Top
Post Reply
40 posts