OK everyone, I just tried the Lenovo M92P mini computer that someone else advised about getting. It was $189.00 and free shipping so I gave it a shot.

It has 4 GB of ram and a 320GB hard drive. So I received it yesterday and it was suppose to be a lease return, refurbished unit and was advised it may have scratches. It looks brand new, not one scratch and opened it up and there was no dust caked on, even the fan blades where clean. I was pleasantly surprised to say the least. This does not mean if you decide to get one that it will be the same but mine is awesome. I bought a Adata 128gb ssd and cloned the disc that already had a fresh copy of windows 10 pro from a win 7 upgrade. The SSD was about $35 from Amazon. Aomei backupper disc clone software as it could clone to a smaller ssd than the original HHD. Oh yes it was free and worked great. OK, before the ssd it took about 2 minutes to load, maybe a bit less, anyway it was annoying. After the SSD install, This is no B.S. either, 10 seconds to windows 10 screen and nothing circling in waiting. Unbelievable. I could not believe it. It did not have any extra bloatware or anything on it so I'm sure that helped. This morning at 6:30 AM my wife and I got up and I said to her watch this, pushed the button and watched her reaction, she did a double take and said no way. I was up till midnight the night before while she watch me boot and re boot the old hhd while I was trying to install EaseUS, and Acronis disc cloners before I found Aomei. They could not clone to a smaller ssd without paying the $50 ransome. So anyway, installed the latest Acorn software 4.12 and hooked it up and it works awesome. I had been using my laptop to run it and decided to do a stand alone computer thus the Lenovo M92P. So I hope this may help anyone looking for a computer that will run Centroid Acorn without spending an arm and a leg. The i5 processor in it single threads at about 1900 +, I can't remember the whole number, but it was a go anyway.
Top

Yes, I use the Lenovo Tiny M92p computers as well.
And now you know why an SSD is HIGHLY recommended. They are so cheap, I no longer use mechanical hard drives.
Reminder, for support please follow this post: viewtopic.php?f=20&t=383
We can't "SEE" what you see...
Mesa, AZ
Top

These computers are great, and come in many different configs. I went with an i7 with 16gb of ram, and an SSD. No looking back.
Top

even better, just wanted to keep this thread alive on which ones are currently being used and where you guys are getting them as i get asked this a alot!
Need support? READ THIS POST first. http://centroidcncforum.com/viewtopic.php?f=60&t=1043
All Acorn Documentation is located here: viewtopic.php?f=60&t=3397
Answers to common questions: viewforum.php?f=63
and here viewforum.php?f=61
Gear we use but don't sell. https://www.centroidcnc.com/centroid_di ... _gear.html
Top

They are good computers, M92P is long in the tooth. They run Win10 fine. M93's are a little newer.
Be aware though, Windows 10 going on life support. WE only have a few more years before Windows 11...and it has hardware requirements.
Reminder, for support please follow this post: viewtopic.php?f=20&t=383
We can't "SEE" what you see...
Mesa, AZ
Top

Here's a link to the Microsoft Windows 11 specs, features and computer requirements. You can even download the PC Health Check App to determine if your current Windows 10 PC is compatible or not.

Microsoft will continue to support Windows 10 until October 14, 2025.
Top

As per Marty’s suggestion i got one for my lathe build and it’s working really good, im even running Fusion 360 on it right at the machine bench, no reason to even boot my workstation for simple programming and modeling.

I will be looking for another one for my mill build as well. 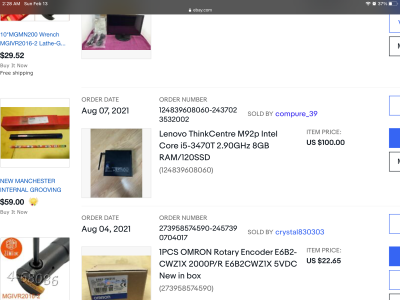