thanks. i've asked chris to chime on on the turret debugging for you.
in mean time your motor mm/rev is wrong. fix that before proceeding.
do a physical measurement. how far does the axis move when you by hand turn the motor one revolution?
most emcos are 5.08 mm / rev screw belted 2:1 so that yeilds 2.54 mm / rev as the overall turns ratio. but always double check it by actually measuring it by hand.
Need support? READ THIS POST first. http://centroidcncforum.com/viewtopic.php?f=60&t=1043
All Acorn Documentation is located here: viewtopic.php?f=60&t=3397
Answers to common questions: viewforum.php?f=63
and here viewforum.php?f=61
Gear we use but don't sell. https://www.centroidcnc.com/centroid_di ... _gear.html
Top

I've set the servo drives to 2000/2000, with 8000 and 10.16 in the wizard as Marty suggested, but I haven't made actual measurements to check that it's correct yet (it *looks* correct but obviously I can't really tell if something is moving 0.1 or 0.2mm by eye). Just working on the turret now to see if I can figure out why it only moves to 4 tools and fails on the other 4, but will get back to that.

Would like to figure this out not just for peace of mind, but I wouldn't be able to own this for just a hobby. This is a side business and am basically working 7/7, so the time I spend working on this is time where I don't produce/sell anything. I appreciate the help.
Top

My apologies, I didn't realize you were in metric.
Reminder, for support please follow this post: viewtopic.php?f=20&t=383
We can't "SEE" what you see...
Mesa, AZ
Top

I am, but what do you mean? Which value do I have to set differently if I'm in metric? Should I set the turns ratio to 2.54 as Keith mentions? I'll do more testing for that, I just haven't had the time yet.

Regarding the turret, I almooooost have it. After a lot of trial and error, watching the inputs, I'm now able to go directly to every tool position. The bit numbers were totally different from the old version and I can't move it by hand as it's locked. But position 5 is giving me trouble. I have it set at a value of 11 and I can send the turret there directly, but once it settles on position 5, the system thinks it's back to 4. So if I wanted to actually send it to 4 now, it wouldn't work as it thinks it's already there. And if I click the turret button, it will not be able to move to 6, as it will start to move, thinks it's in 4, then quickly return to 5. It's the only position that's giving me trouble. It steps through all the other positions fine. If I sent it to 6 then click the turret button, it will step properly through all of them until it gets to 5 again. It's as if there's a slightly different tolerance between 4 and 5. I've been playing with param 851 but no luck so far. I'm going to continue tweaking that one to see if there's a fine point where it's not too big or too small.
Top

Yah, fiddled with it some more, and the issue is between position 4 and 5. When moving to position 5, it does the usual little forward and back, and at the moment where it locks back into position 5, the DRO switches back to 4, and I can see the inputs switch back to position 4 as well. Is there a setting related to this anywhere?
Top

Yes, set the turns ratio to 2.54. Start from there, measure and follow the attached guides for tuning the DROs. Keith is the one that caught my error.

Could you please post a FRESH report after you have made the changes. This is important.
If the control is properly identifying the tools, Then perhaps you have to make adjustments to the turret. Do you KNOW for SURE that it was landing on each tool properly before the software upgrade?

For each position the inputs must match the tool. Are your sensors for Tool 4 or 5 mis-aligned causing the inputs on acorn to read tool 4.
From your description it seems to me that the bits responsible for telling the control is at tool 5 are offset after the tool (thus it selects the tool correctly) but when it backs up to lock, it is no longer in sensor range and bits for tool 4 are then active.

The gray-code logic assumes the inputs are always true, so if the inputs change, the tool selected changes.
When requesting support READ THIS POST first. http://centroidcncforum.com/viewtopic.php?f=60&t=1043

(We pride ourselves on providing timely solid technical support but, without good information we may not be able to help and/or reply until such information is posted.)

This is a picture of my Emcoturn 140 optical sensors. Same as the 6/120 but larger. (I had not taken a picture of the plate that blocks the optical sensors)
These are on the cover when you remove the cover. On the turret is a disk with the barriers that block the sensors. I am pretty sure it is adjustable.
Just carefully remove the end cover. I would mark the plate to the turret body as a reference. Adjust it a little bit at a time, see if it helps.
I don't recall that Emco had reference marks for exactly where it is supposed to be when it was set up. 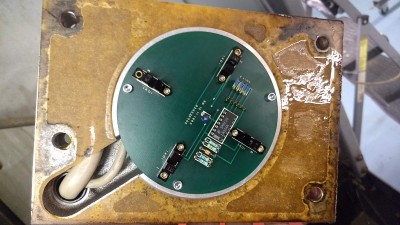 Correction, it may NOT be adjustable. I just found this picture: 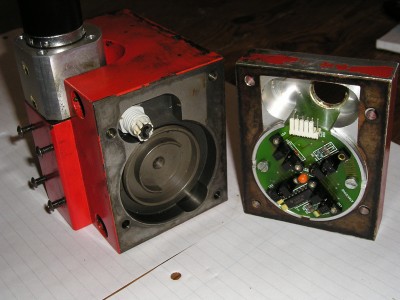 You are going to have to dig in and look things over.


Here is a sheet I found for the turret's truth table. 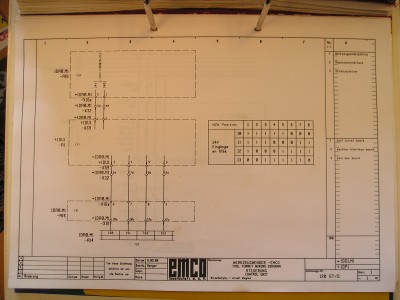