I started this build back in October, and just made my first cuts last night. Lots to learn still but pretty satisfied with the project so far.

I loosely followed this Youtube video, which is maybe the best build video I've ever seen:

The base torsion box, gantry, etc. are all made of baltic birch plywood. The X and Y axes ride on V-groove bearings on DIN rails, driven by NEMA 23 steppers with timing gears on them, which pull the gantry and X-axis trolley along tensioned timing belts. The Z-axis rides on linear bearings with a NEMA 23 driving a ball screw. 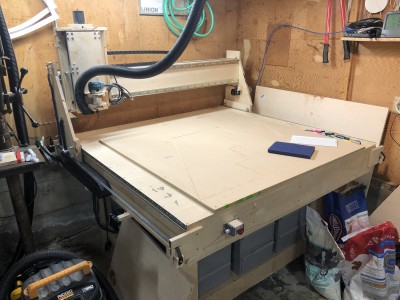 I used DM542 stepper drivers, with the + step / direction terminals wired to the Acorn DB-25, with step / direction pins configured as inverted. The DM542 - terminals are wired to DB-25 common pins. For the DB-25 wiring I hacked up an old printer cable I had laying around and used a continuity tester to figure out which pin corresponded to each colored wire in the cable bundle.

I have two 40A solid state relays wired to DB-25 output pins to switch the Makita router and shop vac / dust extractor. 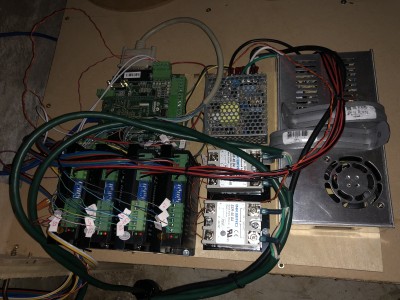 For my PC I have an 8-core / 32 GB RAM fanless mini-PC. 2 cores / 8 GB RAM are allocated to a Windows 10 VM that runs CNC12 and the rest of the resources are allocated to other VMs that run my home Internet router, weather station, home security cams, etc. I access the CNC12 / Windows 10 VM via the AnyDesk remote desktop app on an iPad and bluetooth keyboard. The UI is a little small on the iPad 9.7" screen, but still totally usable. I might invest in an Android tablet with a larger 16:10 screen if I can find one for cheap. 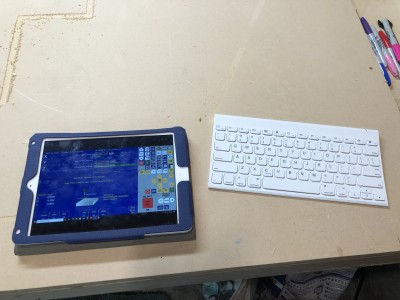 Here's a video of a test using it as a plotter with a Sharpie pen back in early Dec:


Thanks to all for the great info here on he forum. It was invaluable while I was going through this build.
Top