I've done a pile of these, but this one is the first with the new Acorn conversion. After taking the time to test and tweak the smoothing settings to get a custom set that worked well with my machine and pulled out the detail that is needed for these, this was the finished piece. For anyone attempting to do higher detail 3D reliefs, I would recommend that you read up on the smoothing configuration parameters in the manual to get acquainted with each parameter and what it does and how each one works with the other to control how smoothing is applied. Each machine will be different, but for mine, just plain "Precision Router" and also "Precision Mill" would remove most of the smaller detail and mute much of the rest. The log cabin looked like a plywood shack until getting the various parameters tweaked into shape so that the detail of the finished cut matched the Aspire preview and also didn't cause the machine to "bang" around.

This was an ash slab. Design was cut with a 0.0625" ball nose at 8% stepover (after a 0.25" end mill rough pass), 90ipm, at about 2.5 hours (approx. 10" x 6.5"). Probably about an hour better than the old controller. Clean up was just a sanding mop and a little pickin'. One good clear coat to seal, black stencil ink in the text, Vandyke brown glaze in the relief, some sanding off of over spray etc., and a final clear coat to finish up. 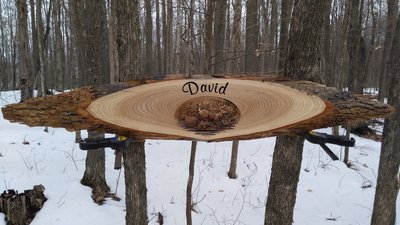 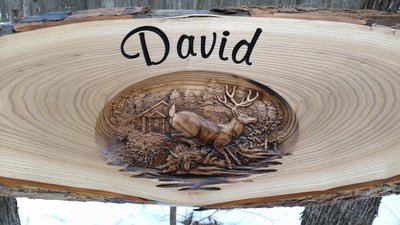 Very nice Scott,
Your level of detail is so good. I am new to the 3D game trying out different feeds and speeds & bits, step overs, roughing passes.
I see I have a bit of schooling yet to do.

Thanks for posting your recipe. I struggle between cut quality/detail and time to carve. I shoot for 2 to 2.5 hours of machine time.
I would like to hear more on your smoothing settings or what you are looking for the machine to do with those settings.
I have only used the precision routeing setting.

I look forward to see more cravings. And any thoughts on material choices.
Todd
Engineering Hell: Everything's right and nothing works.

Wow, that looks awesome! I hope to be able to produce results like that once I have everything worked out...
Top

Sorry for the late reply, been busy and also wanted to get another one under the belt to do some more testing of settings etc.

Here's another one. This one is also a piece of ash, and was a bit of a challenge. Due to the beautiful but wild grain, it came out of the kiln like a potato chip! I had to first attempt to get a 'close as I could' model of the shape so that I could surface it off and have a known shape to apply the other components to. In the end, it turned out pretty good, but I told the customer, good luck hanging it! Awesome chatoyance!

As far as settings go, it's going to be very dependent on your machine and will take some testing of the smoothing parameters to find the optimal settings. Read up on the smoothing settings in the manual to understand how each one works and interacts with others. To start with, setting the accel/decel in the wizard to something that your machine can handle without causing excessive banging and vibration from direction changes. For mine, 0.5-0.7 seems to be good, but I did set it at 0.4 just for some 3D testing and it worked ok, but I wouldn't leave it there for everyday cutting. Mine is all rack and pinion, so if you have a higher resolution ballscrew setup, you should be able to get good results.

My smoothing settings for fine detail 3D are shown in the attached image. The first setting is NBpts (#221) and is set to 1. The higher the setting, the more rounded corners are. The second setting is Step (#222) and works along with the first setting to determine tolerance. (Tolerance =(Nbpts*STEP)/3). I've set it at 0.001. The 3rd and 4th settings are left at their default. The 5th setting is W for feature width (#226) and works along with the 6th setting of Min-angle (#227). This one, W or #226 proved to be very important to keep detail and with the default of 10, basically wiped out much of the detail. I set it to the minimum of 1 so that shallow detail is followed or considered significant instead of insignificant and smoothed over. Min-angle is fine at the default of 95. The 7th setting is S-curve technology (#228) and I have found it to give a little better smoother motion. YMMV, so check it out. The last two settings, curve feedrate and acceleration multipliers (#230 and #231) don't seem to have an effect on detail, but do have an effect on how the machine behaves on directional changes at the end of the raster passes. Lowering them will soften those directional changes and lessen the banging that can occur. So, you can try these values and adjust to suit your machine. The attached video shows how my machine behaves with these settings and provides the desired detail. Spindle sounds terrible and has run it's last 3D, new one has been installed and is sounding much better!

Another thing to consider is keeping the feed and plunge rates the same and you don't need to set them much more than 120-180 ipm, as the machine will never get up to speed before needing to slow down again. I don't really shoot for a time, because in general, anything with detail and done with a 0.0625" or smaller ballnose will take what it takes and you can't really push it faster and still get the desired results. A smooth or more flowing 3D design would be a different story and would likely work well with the precision router settings. The design shown took approximately 4.5 hours and was approximately 7" x 14". 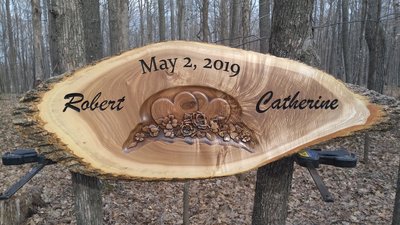 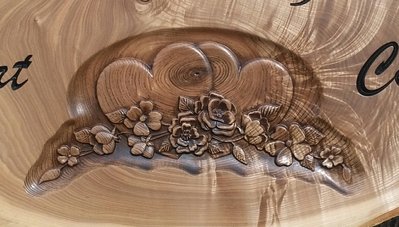 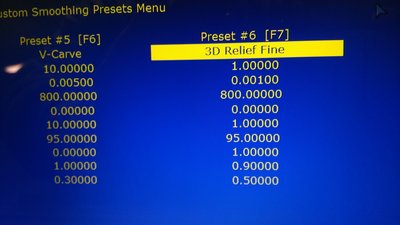 My machine is all ball screws and DMM servos. So I'll try your settings and go from there.
I like how you set up a separate fine detail smoothing setting
Do you switch back to precision smoothing for non 3D cutting?
I 'll worry less about time and more on quality
Thanks
Todd
Engineering Hell: Everything's right and nothing works.

Yes, I switch to the 3D relief fine settings or v-carve settings as needed and then switch back to the default "Precision Router" settings when doing normal/2D cutting type work. For my v-carving, I like a smooth flowing in/out up/down motion instead of sharp jerking at the corners of designs or the corners of serifs on lettering, so for that one I've dropped the acceleration multiplier down to 30%. I've dropped the precision router one to 50% as well, to soften directional changes for my machine.

You can also switch smoothing profiles in your cutting file, so you could set up a specific post for 3D work or edit the file beforehand to call up a certain smoothing profile as needed and then switch back at the end.

Examples from the manual...

Looks like I have a lot to learn about Acorn and it's settings, my hat is off to you on more awesome work. The wealth of knowledge just in this thread is outstanding.

Sword wrote: ↑Sun May 05, 2019 4:42 pm I had to first attempt to get a 'close as I could' model of the shape so that I could surface it off and have a known shape to apply the other components to.

Scott I have a easy tip for you on this going back to my vehicle wrap days. If you have a DSLR camera or honestly now a days a camera phone would probably work I haven't tried it yet. You just take a straight on photo and bring it into AI my preference or something similar, measure the part and scale accordingly. Then you just trace the outline, it's fast and very accurate way to get a template for your artwork.

I already do that, or similar. I have an old tablet that stays in the shop and I lay the piece on the table, then get up on the table and take a straight down pic of it.

Then I bring that into Aspire and scale it to size. That gives me an image of the piece that I can then use to create and arrange artwork on. I'll often use a feature or knot then to set as my 0,0 datum. The problem with this one was that it was like a potato chip.

Think of a Pringles chip laying on your table and you need to come up with that surface in the form of a model in Aspire etc. so that you can then combine the other components into that surface and project a v-carve toolpath onto. I struggled with getting that kind of shape, but got close enough with a one direction sweep and some tilt/fade magic, that I could then surface the blank off and then have a known surface (that shape/model is turned off in the attached image). That final piece had about a 1.375" or more upward arch with a good amount of tilt to the upper right and a long slope to the right end. I should have taken a picture of it from the side edge!

Ahh I see your problem, I'm still learning how to do 3d design I don't have Aspire just V-carve pro. I've been doing my 3d cad in fusion and using V-carve for the tool paths I still haven't figured out tool paths in fusion yet. I've also been messing with blender for 3d design. I'm just having a hard time transitioning from 15 years of mainly graphic design and photo editing.

So if I'm understanding correctly, you had to do a 3d model of the work piece and then place the 3d relief one that model? Sounds like it was a pain, I'm to lazy I would have just surfaced it flat. Turned out really cool nice work I like the way you did the stain, it almost looks burnt.